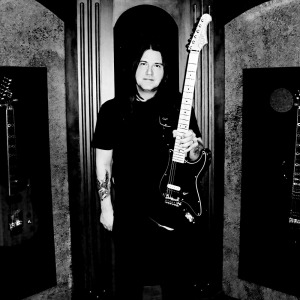 Mick Murphy, guitarist with My Ruin and Chevy Metal, has been welcomed to the GJ2 Guitars artists roster.

Murphy and renowned guitar designer Grover Jackson met backstage at a Chevy Metal gig on the 17th July – as fate would have it, the birthday of both men. Jackson surprised Murphy with a gift after the show – a Glendora ‘Spirit of 79’ Prototype #1 guitar.

“There are not too many true guitar heroes around these days but Mick Murphy is one of the few. We love his work with My Ruin and Chevy Metal and we are really proud to have him playing our guitars,” says Jackson.

Murphy commented, ““While touring the factory on a recent visit to the GJ2 showroom with My Ruin, Grover & Jon gave me a beautiful new black Glendora with a maple neck and welcomed me as a part of the GJ2 family, which I’m proud to represent.”

“I’ve never felt such a connection and support from a guitar company as I do with GJ2. It’s an honor to be playing their guitars,” he continued.

Meanwhile, Mick and Chevy Metal play at The Sayers Club in Hollywood, Ca. this Saturday, September 28th to benefit families affected by Autism and next month at The Whisky a Go Go for the ‘ Rock Against MS’ benefit on October 17th.

My Ruin’s new album, The Sacred Mood, is out now. You can read Skin Back Alley’s 5/5 review of the album here.