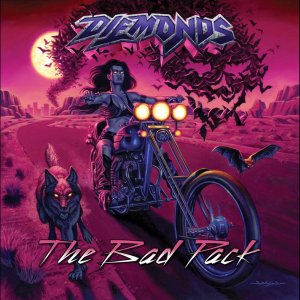 You can vote for Diemonds to be added to the bill of the 2015 Sweden Rock Festival by heading over to the official festival website!

The wider world may have fallen out of love with the sleazy fire of US west-coast rock n’ roll in the wake of the all-conquering tidal wave of grunge, but for fans of loud guitars, big beats, bratty lyrics and ratted hair, a select few have kept the flame burning warm and bright.

The self-excoriating introspection that provided a more credible sonic experience for Generation-X didn’t manage to sweep away the love that many still have for an over-driven Gibson Les Paul turned all the way up to 11. Bolt on gang-chant vocals, youthful lyrical rebellion and an appetite for a good time, and many are still in, well, nirvana.

One such set of flag wavers for the Sunset Strip sound are Toronto’s very own Diemonds. Self-styled as the Canadian provincial capital’s “hungriest band”, they’ve slowly but surely risen to prominence on the North American rock and metal circuit since their formation in 2006. And after a listen to their debut full length LP, The Bad Pack, it’s not hard to understand why.

A skin-shredding wall of sand-blasted guitar? Check. A heart-rending dose of soaring melody? Yup. A deadly blast of down and dirty rock n’ roll? You bet. There are reasons, after all, why Classic Rock Magazine voted their 2008 EP, In The Rough, the best of the year, and their 2012 music video for the anthemic ‘Get The Fuck Outta’ Here’ the 4th best of the previous 12 months.

Opening manifesto ‘Take On The Night’ ensures that the album starts as it means to go on, powerfully and with pure rock n’ roll dynamics, vocalist Priya Panda’s voice soaring cleanly and crisply above the high-octane wall of sound, occasionally breaking and delivering the gritty edge the band’s signature style demands. You’re left with the distinct impression that guitarists C.C. Diemond and Daniel DeKay know their way around their respective six-stringers, and that there’s more than a hint of irony in the image conjured up by Priya’s nom-de-plume. 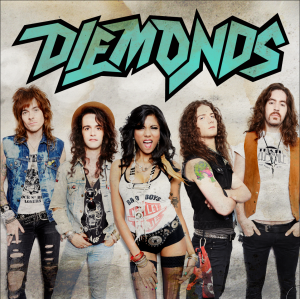 It’s an impression that the following track, ‘Lil’ Miss’ does nothing to dispel, before ‘Loud N’ Nasty’ sums up the bands entire raison d’etre in 3 heart-stopping minutes. Drummer Aiden Tranquada and bassist Tommy Carvalho build a solid foundation for fan favourite ‘Get The Fuck Outta’ Here’, which calls to mind the similarly titled song by those renowned sleaze-metal merchants, Skid Row. Rather than a vaguely misogynistic rant about throwing last night’s conquest out of the front door however, Diemonds turn the concept on it’s head and deliver a slab of rock that hints at the burning desire to leave an anonymous and unremarkable life behind for pastures new and green.

Just as you expect the pace to slow and a power ballad to hove in to view, The Bad Pack delivers it’s title track at pace and not inconsiderable volume. “The underworld reigns supreme, I’m living proof of it,” sings Priya, as the band thrashes wildly behind her, stamping all over the competition and leaving them for dead. ‘Overboard’ and – appropriately enough – ‘Left For Dead’ then lay on the low-end, more than proving the point. Perhaps the heaviest songs on the album, they’re full of murk and menace.

‘Livin Tonight’ and ‘Trick or Treat’ power through their respective running times with no small amount of brio, and the whole album is then rounded out by ‘Mystery.’ The longest track on the album by far at five and a half minutes, it nevertheless delivers on the band’s promise to have “one boot in the gutter and the other in your teeth.”

When bundled up with this supersonic salvo of a debut LP, a successful set at Canada’s Heavy MTL festival along with support slots for the likes of Slash, Steel Panther and HellYeah! mean it is surely only a matter of time before many more are tuning in, getting down and rocking out to the rough and ready sounds of Diemonds.

One thought on “Without a song: Diemonds – The Bad Pack”