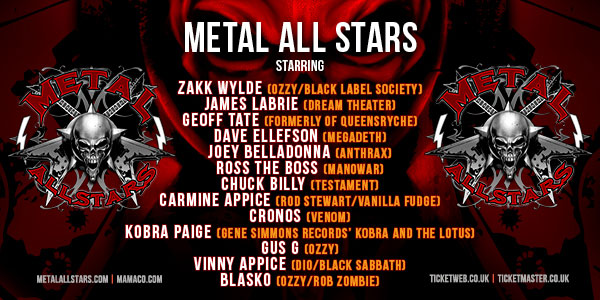 The Metal All Stars supergroup have postponed their European tour.

The group, consisting of renowned rock musicians Zakk Wylde, Joey Belladonna, Chuck Billy, Geoff Tate, Carmine Appice, Cronos and others, were due to being their 19 date tour in Bochum, Germany on the 28th November. The shows now won’t happen until Spring of 2015 owing to scheduling conflicts.

The group said in a statement: In a statement, the group say: “New tour dates in these cities will be announced shortly. Due to this unfortunate delay, we will be adding additional headline artists to make the new lineup even more metal for 2015.

“Current ticket holders and purchasers of VIP Meet & Greet packages will have their tickets honoured for the new dates. More official information will follow and be available online at www.metalallstars.com and at your local ticketing source.”