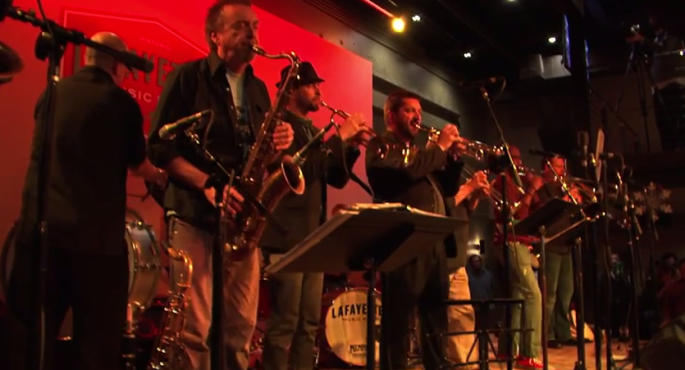 The track is lifted from the ensemble’s debut album, Lift Up!, released today via Blue Barrel Records.

“One of the great things about this group,” says saxophonist Jim Spake, “is it’s so elastic, musically and in terms of personnel. Sean’s [Murphy] got to be there, he’s our font of craziness… but it’s like [drummer] Tom Lonardo says: We’re all just moving wind. It can be a different band on any particular night, because there are so many things we can do with the music.”

Check out the group’s video for “Squir-re-ly” below:

Read the Skin Back Alley review of Lift Up! here and find out why we called the LP “…a soulful, joyous, life-affirming slab of sparkling and spirited brass, moving head, heart and hips in equal measure. It is at once sophisticated AND celebratory. In short, it’s a delight and you don’t want to miss it.”