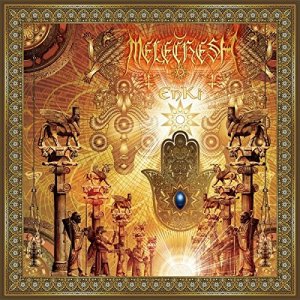 “A raging river of Middle-Eastern themed black-metal, you won’t hear better all year.”

Phil Anselmo once revealed that Pantera’s approach to songwriting was to take the money-riff that most bands used in their song breakdown and make it the very basis of the song itself. It’s a philosophy that worked spectacularly well for them and is one that Assyrian extreme-metal masters Melechesh have surely taken to heart.

Over the course of the last 20 years or so, frontman Ashmedi and his very metal brethren have served up a spectacular catalogue of dark, arcane, occult-themed music that has had a relatively small but devoted audience enthralled by its near perfect execution. Perhaps, after years of patience and devotion leaving them poised on the verge of greatness, Melechesh’s time is finally now.

New album Enki is a raging river of Middle-Eastern themed black-metal, riding high on an all-conquering wave of dynamic groove that is primed to lay waste to all before it. The likes of lead-single “Lost Tribes”, “Tempest Temper Enlil Enraged” and “Enki – Divine Nature Awoken” all deliver epic and atmospheric blasts of sonic sagacity, roaring out of the desert like a vicious and vengeful deity.

From the four-minute thump of “The Pendulum Speaks” through “Multiple Truths” and on to the magisterial closing saga of “The Outsiders”, Enki evokes the very qualities of the album’s namesake, the Sumerian god of craft, creation, water, wisdom and mischief, who mythology tells us also saved humanity from the Deluge sent to kill us by Enki’s half-brother Enlil.

Thank Melechesh and Enki for that then, and hail the coming of this fine and vital album. Even at this early stage, it feels like you won’t hear better all year.