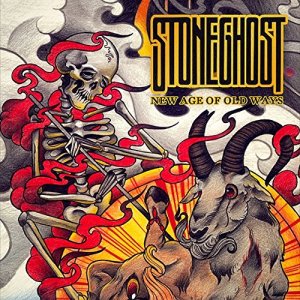 Grab yourself a fucking huge melting pot. Add two parts groove metal to one part metallic grunge. Throw in a pinch of sludge and a soupçons of sunset strip guitar riffery. Mix well then leave to boil in the raging fires of Hades.

Winning plaudits from pundits in all areas of the rock and metal community, one listen to New Age Of Old Ways leaves you with no problem understanding why. Not since Pantera evolved in to the all-conquering groovemeisters of Yore have a band delivered this stunning style of metal in such an accomplished fashion.

From the brain-busting, face-melting opening salvo of “Faceless Ghost” onward, Stoneghost deliver riff-after-groove-after riff, never short of ideas to keep heart and mind engaged. Indeed, were they still active, the thundering funk of “Devil’s Motion” would have had Infectious Grooves quaking in their boots. One suspects that should he hear this monstrous record, Rob Trujillo’s ear will definitely be pricked.

From such promising beginnings are mighty metal careers forged. With a lot of hard work and a little luck it’s not too hard to imagine Stoneghost developing in to one of the UK’s heavy music finest. No pressure then. Whatever the future holds, New Age Of Old Ways is a remarkable start, and plenty to keep the appetite satiated for some time to come.

Find out more at Stoneghostband.com and check out the band’s official video for “Faceless Ghost” below: