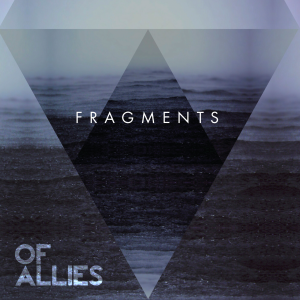 Artist: Of Allies
Album: Fragments EP
Our Verdict: 7/10
Release date: 11th May
Find it at: Of Allies webstore
Review by: Graeme Blackwell

“Towering and explosive from first note to last, Fragments packs one hell of a punch.”

Here in the UK it’s been a week of people having to eat their proverbials; be it hats, kilts or just whopping slices of humble pie. And now all those people who have ever suggested that nothing good has ever come out of Hull should be prepared to scoop up their words, slather them in Grey Poupon and a sprinkling of shit, and swallow them whole.

It’s been a stunning few years for the rock and metal scene in the Ridings of Yorkshire. Some of the county’s finest acts have dropped some of their most remarkable work over the past 24 months, and now you can add to that list Hull’s Of Allies and their new EP, Fragments.

Towering and explosive from first note to last, this five song collection can only help to cement the growing reputation of these Four Yorkshiremen of the Apocalypse. It’s a multi-layered, beautifully nuanced production that packs one hell of a punch.

The opening title track makes clear Of Allies’ intent, immediately delivering an aural assault that has an intensity that most bands could only hope to muster. But far from bursting out of the blocks at full tilt and then rapidly running out of steam, “Fragments” ebbs, flows and then builds again to a stunning breakdown that – if you have ears and a pulse – can only leave your jaw somewhere near the floor. Just listen to that eerie, sustained guitar in the verse that becomes a dynamic, rhythmic roar in the chorus. This is music to move both heart and mind.

“ONE19” doesn’t let up the pace, intensity or quality. It’s a barnstorming track that surges forward under the guidance of Danny Barrick’s ballistic drum work and the fluid interplay of Tom Hewson and Rich Nichols’ guitars. Nichols also shows incredible range and control in his vocal across the track’s 3 minute running time. If there’s one complaint it’s that the whole thing is over just too damn soon.

“Old Bones” shows that Of Allies know how to groove as hard as they rock and, if there’s any justice in the world, will soundtrack a million nights of slam-dancing at rock clubs throughout the land. “Tempers” powers through on a wave of squally guitar and chest-thumping emotion, and the EP is then rounded out by “Call It Home”, a song that begins more gently than most here, before developing in to a Foo Fighters-sized heartfelt, mind-blowing, melodic sonic rush.

A darker, more developed and intricately detailed work than their previous EP Tempers, Fragments marks out Of Allies as ones to truly watch. Highly reco-fuckin-mmended.

Check out Of Allies’ video for their track “ONE19” below and find out more at the band’s official Facebook page.

One thought on “Album Review: Of Allies, ‘Fragments’ EP”