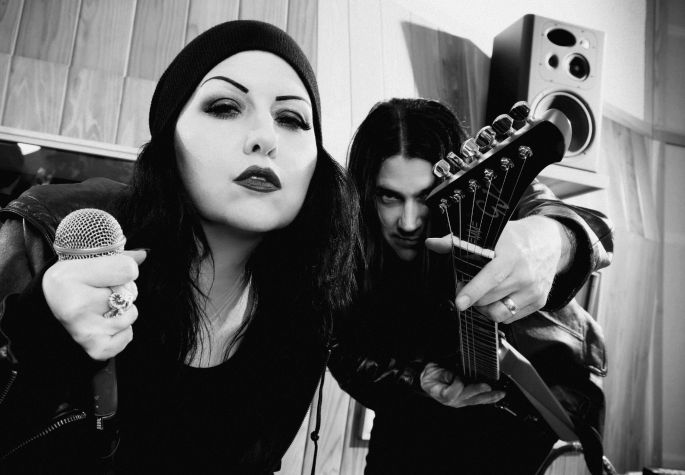 This Saturday night, 12th September, sees the advent of the most hotly anticipated ticket in rock. For one night only, a thundering hoard of punk, rock and metal’s finest musicians will descend upon LA’s Fonda Theatre for the live debut of Teenage Time Killers, the heavy collective spearheaded by Reed Mullin (Corrosion Of Conformity), Mick Murphy (My Ruin, The Birds Of Satan, Chevy Metal, Neanderthal) and John “Lou” Lousteau (musician, producer and chief engineer at Studio 606.)

Appearing alongside the likes of Corey Taylor (Slipknot), Randy Blythe (Lamb of God), Neil Fallon (Clutch), Tommy Victor (Prong) and Lee Ving (Fear), is My Ruin’s Queen of Scream, the legendary maven of metal, Tairrie B. Murphy, who is set to perform her track from TTK’s debut album, Greatest Hits Vol.1, “Clawhoof.”

Murphy herself graciously took time out to speak with us in and among rehearsals for Saturday’s show and fending off the inferno that is the current heatwave beating down on LA.

SBA: How did you come to be a guest artist on Greatest Hits Vol.1?

TBM: Nepotism! I highly recommend it. Just kidding! I believe Reed Mullin (Corrosion of Conformity drummer) asked my husband (Mick Murphy) if I would be interested in doing a song after Mick played him our last My Ruin album while they were in the studio recording. Mick was introduced to Reed by our good friend and TTK producer John Lousteau who Mick grew up with in Knoxville, Tennessee and who occasionally sits in on drums with our band live when we play Los Angeles. Once Mick started working with Reed & Lou, that’s when the album really started to take shape and come together musically.

Your song on GHV1, “Clawhoof”, is a killer track. How did you come to record that specific song? Was it written with your vocal style in mind and did you have input in its writing?

Thank you. Yes, Mick did write it with me in mind. Many of the songs were matched with vocalists after the fact but a few were written with specific people in mind. “Clawhoof” was one of them. I had nothing to do with the music. Just the lyrics. Once he demoed the track and played it for me, I loved it.

Where did the name come from?

Believe it or not it was actually the working title of the project before Reed decided to change it to “Teenage Time Killers”. For months, the guys had referred to it as this and I really dug the name because it sounded so evil. I guess it just stuck in my head after hearing them say it for so long and when they decided to go with TTK, I had just started to write my lyrics so thought it might be kind of cool to use it as the title of my track to keep it included in the project. I built my song around it. Unlike many of the other recordings on the album, it’s got a more sinister underlying theme to it rather than political.

I understand you were actually suffering with the flu when you were recording? Is that right? You’d never guess, the song sounds great!

Again, thank you and yes, I was pretty ill the day I went into the studio to lay my vocals at 606. My voice was definitely not in its usual form. You always want to feel you are at your best when recording, especially when you are a guest and being featured on someone else’s album rather than your own. I was a bit concerned with a room full of dudes watching me in between coughing up a lung. I did a couple takes and felt like my throat was really raw but they loved it and that was it. When I first heard the track mixed it took me a minute to get used to it because I’m used to my scream in My Ruin which is more metal, but I think being sick gave it a more punk rock feel which was pretty cool considering the overall vibe of the album as a whole.

During the recording process were you conscious of being the sole female contributor to the project at all? Is that something that’s in your mind at all as the show at the Fonda Theatre approaches?

I didn’t really think about it until the end of the recording and I was listening to the final mixes and sequence. I’m stoked to be the lone wolf representing the ladies on a project which includes some of my favourite male vocalists like Pete Stahl from Goatsnake and Neil Fallon of Clutch. As far as the show goes, I just want to have fun and do my thing. I’m not really focusing on the fact that I’m the only woman, just happy to be a part of such a cool project with so many rad dudes.

The show at the Fonda Theatre in LA is taking place on the 12th of September and being that it’s one night only, should be one hell of a night. It’s an extraordinary line up of musicians to have playing in one place. Can you share any details about what you have planned?

There are no opening bands, just 2 hours of TTK which are going to be a hard, fast and loud on stage. Mick is playing guitar for the entire show on 50 songs with all the guest vocalists. Reed is drumming much of the set and also singing a few songs and John Lousteau is drumming a few as well, including the ones with me which My Ruin bassist Luciano Ferrea is also playing. The show’s set is made up of the TTK album, songs by some of the guest singers’ own bands and a bunch of classic punk covers. It’s gonna be killer. Pun intended. 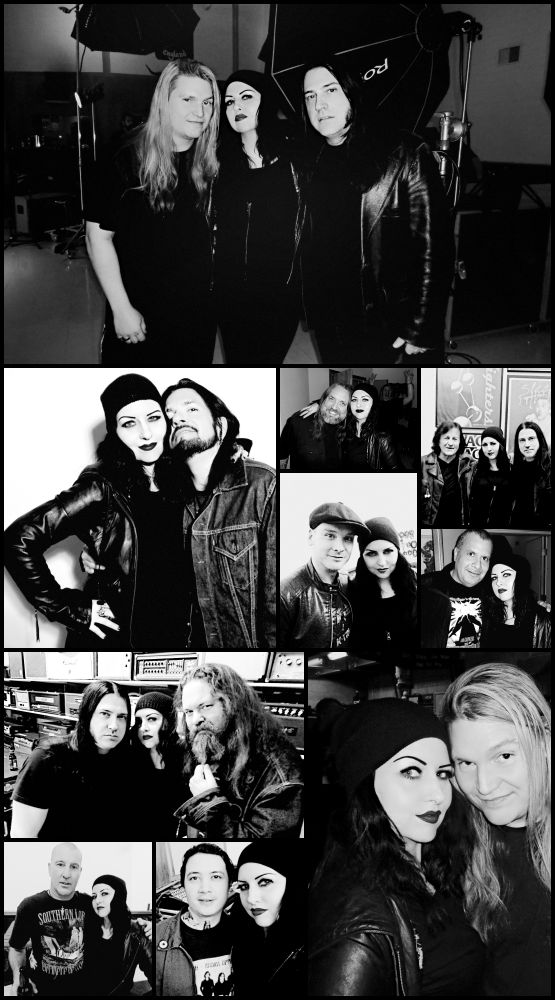 Has it been difficult getting all the musicians together for planning and rehearsals?

When you have this many people involved in a project, it’s bound to be a little complicated and a bit of a logistical challenge. The main core of the band has been rehearsing the past few weeks at our studio with a few of the vocalists who are based in LA coming in, but many of the guests are flying in last minute to do a full show run through with everyone at Studio 606 on the last 2 days before the gig.

I have a huge amount of respect for my husband Mick as a musician and, being in a band with him for the past 15 years, I’ve seen him at his best on stage and in the studio with My Ruin and all the side projects he’s been a part of, from Neanderthal to Chevy Metal, The Birds Of Satan to Heavy Seventies as well as co-producing my new solo rap album with me. But he’s really stepped up his game to another level with the TTK album and this show which he really helped to pull together this past month in rehearsals.

Mick co wrote/co produced GHV1 and played guitar on the majority of the album, but his contributions have kind of gone unmentioned in the press and overshadowed by some of the more famous names involved, which is a shame because of all the time and work he put into it. He’s not the type of guy to toot his own horn so I’m gonna toot it for him! He deserves it. I can’t wait to share the stage with him again and also watch him rock with all the other artists performing before and after me.

Knowing that not ALL the guest artists from the album can be there on the night, have the artists who are going to be there had to learn new songs from GHV1 to perform?

Yeah, there are a few people who can’t make it due to their own touring schedules so a couple of the other vocalists are going to do those songs.

Which songs will you be performing, and will you be playing any songs other than the TTK songs on the night? Can we expect to hear anything from the My Ruin catalogue?

I’ll be performing my track from GHV1 along with “Moriendo Renascor” from My Ruin’s last album and a cover of Mudhoney’s “Touch Me I’m Sick” which I like to put my own red lipstick twist on live!

It’s been a while since you last performed live with My Ruin, and your fans will know that you released your first new rap album in over 25 years, Vintage Curses, last month. Has it been challenging to get back in to that Metal headspace again?

I thought it would be but surprisingly, my scream came back to me pretty quick and naturally. Coincidentally, my first rehearsal with TTK was on the 1 year anniversary of the last night I performed live with My Ruin in the UK which was on The Sacred Mood Tour in August 2014. I hadn’t screamed since then so I really had no idea what to expect given this past 12 months my headspace has really been focused on the recording and release of my new album and working on my first book which I am currently in the early stages of writing.

Is the show being recorded at all? All these incredible musicians from the world of Punk, Rock and Metal playing the same show together seems like too good an opportunity to miss!

Yes, I agree it’s going to be a memorable evening for everyone involved and plans are in the works as I write this to make it happen which I think it will. Unfortunately there are a lot of factors that go into a big show like this behind the scenes and it’s often comes down to money, rather than art much like most things in the music industry but fingers crossed because we would love to be able to share it with all those who can’t be at the show due to it being a one off special event in LA.

Check out our review of Teenage Time Killer’s Greatest Hits Vol.1 here, along with our interview with TTK songwriter and guitarist, Mick Murphy, here. 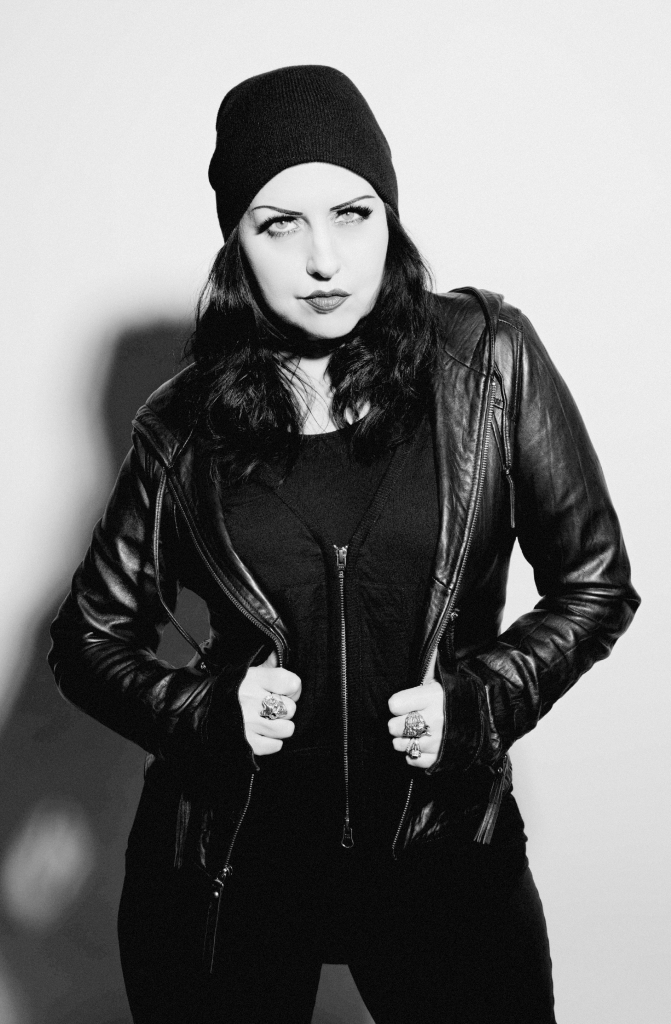 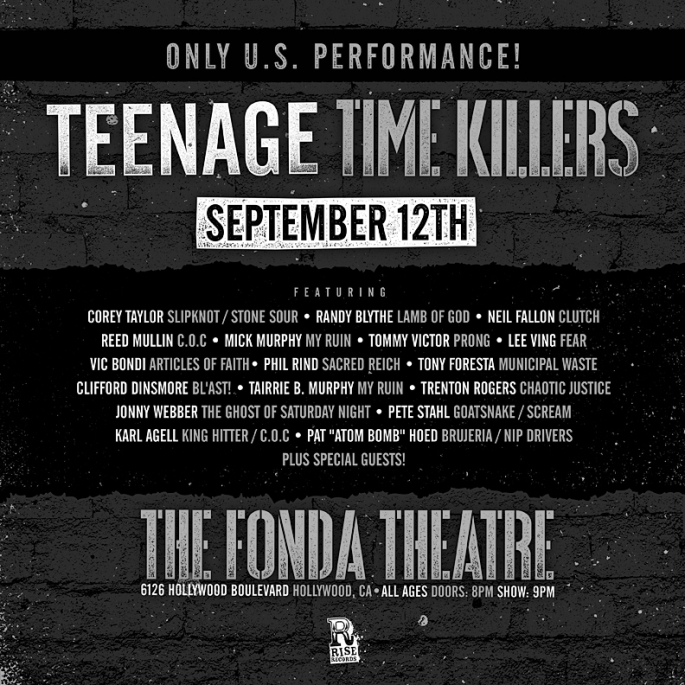