The collection is set for release on the 16th of October via OK Recordings and features the group’s ever deepening exploration of dark and lovely early-American songs, alongside a couple of breath-taking originals.

Wolvering derived its name from the place where it was recorded. The trio spent a week of January tucked away in remote Wolverine, Michigan, where these songs were captured, mostly live, by engineer Shane Leonard. When the access bridge flooded and iced over, the fireplace became an essential part of the session; you can hear the crackle sometimes as the songs fade in and out.

Maiden Radio is comprised of the talents of Julia Purcell, Cheyenne Mize and Joan Shelley (the latter who also just released her new solo album Over and Even). 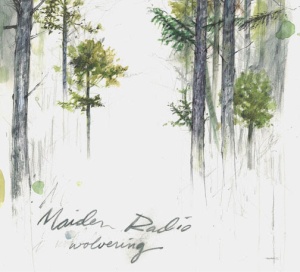 You can hear the title track from Wolvering now over at Bluegrass Situation.

Watch Maiden Radio perform the traditional song “Sweet Sunny South”, which features on the album, below:

Maiden Radio will playing the following lives shows in October: