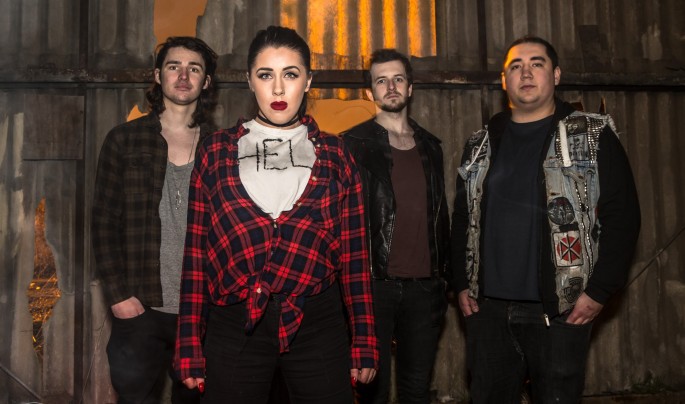 Eva Plays Dead feel like a band in the ascendancy; a hard rock outfit building a solid fan-base on the back of hard work, sheer grit and determination, combined with an ever-growing catalogue of memorable, mosh-inducing tunes and a reputation for reliably raucous live shows.

Following the release of a new EP, Sounds of the Written Word, this summer, and the recent unveiling of the official video for their track “1950’s Woman” via the UK’s premier rock outlet Kerrang!, Eva Plays Dead are about to hit the road for an extensive UK headline tour.

SBA: How are you feeling now that your “Sounds Of The Written Word” EP has been out for a little while? What’s the response been like?

EPD: Putting out the EP carried both a massive sense of relief and a nerve wrenching experience at the same time. We spent a long time writing and recording, followed by an equally long time sitting on it to make sure that we gave it the best release possible (and we’re not the most patient of people.) However as soon as it was out there we were straight back to being on edge whilst we waited for the response. We’re really happy with the reception to Sounds of the Written Word, both from the press and our fans since picking up some sick reviews and messages.

I get the impression you’re a very hard working band. You certainly gig a lot and put in the miles to build support for your music. Where does that drive and determination come from?

We’re glad it’s not going un-noticed! We’ve been writing in this line up since 2011 and were all playing in bands prior to that as kids and over the years the drive has kept growing. It’s very cliché but whenever we make a tiny step of progression, it makes all of the hard work worth it and doesn’t faze us. Progression can be anything from getting a great review, playing an awesome show or gaining a new fan.

The time and effort you’ve invested seems to be working for you. It’s not every band that can mount a successful Pledge Music campaign. Do you feel that you’ve progressed in that regard and how does it feel to have a devoted core fan base like that?

The Pledge Campaign was a massive shock to us as we were 99% sure that it wouldn’t go through when it kicked off – we had around 3 different back up plans! The fact that we surpassed our target was the first real time that we realised how solid our fan base is – it’s a very humbling feeling.

Given that you do work hard on the road, have you got any words of wisdom for new and aspiring musicians about the perceived ‘glamour’ of the touring life?

We’d hardly call our approach glamorous. A few years back, we bought a van (and then another when that one died) to get around on our tours as it is more cost effective than renting a flashy van with all of the frills, considering how much we travel (50 shows in 2015). We’d only recommend doing this if you’ve looked carefully at the band’s funds, considered every expense and are certain you can afford it. We recently had a catastrophe where our engine melted and since our money had just been pumped into the release, we asked our fans to help out and couldn’t believe how quickly we raised the cash! 24 hours must be a record.

Generally though, touring is a lot more than sitting around in a van and playing a show when you’re first getting started (it is for us anyway) so when taking the DIY approach you need to have the focus and ability to see the bigger picture to make sure that everything is covered: secure bookings, logistics, accommodation, fuel costs, promotional campaigns, chatting to people at the show, designing and ordering merchandise for the runs and all of the rehearsals leading up to it.

Why do you take a DIY approach to your career in music? Mind-set? Necessity? A mix of the two?

Since we launched EPD in 2013, the DIY approach has been much more attractive as we had a bad experience with a previous record label affiliation, so this gave us the freedom to work at our own pace without relying on anyone else – everything we achieved was down to our hard work which offered a massive sense of accomplishment. Alongside this though, we didn’t want to pitch to management teams or labels when we had no history, so the DIY approach has allowed us to build our own foundation and track record.

How do you think that DIY ethic and direct approach with your fans has helped (or hindered) you as a band?

It has most certainly helped us as it means that we have direct contact with them on a daily basis. We have such a strong relationship with our core fan base and we wouldn’t be where we are today without them as they always share our new release online, buy and wear our merch and give us that boost when we need it. Saying that, introducing management or the like to the EPD team wouldn’t hinder the band as we’d make sure that we work with people who ‘get us.’ 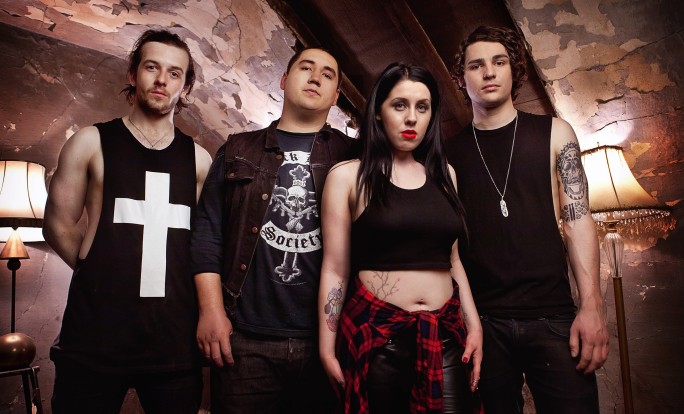 You guys seem to have that quality of being able to move past setbacks or turn them to your advantage. If an average review lands, or the van breaks down on the way back from a gig, you always seem to present a positive response. Is it hard to maintain that approach? How do you do it?

Ha! I feel like I know exactly which occasions you’re on about… In all honesty, the initial response isn’t as calm as our public response. We all talk about it as a band and decide what the best way to approach the scenario is as opposed to just letting it slide by. Negative reviews for example – we’re fully aware that it’s only the opinion of one person so we’d rather put it up for discussion to see whether people agree with it or not.

Reading about your beginnings as a band, “…a Japanese school exchange…” doesn’t seem like the most usual of origin stories. How did the band come together following Matt and Tiggy’s meeting in the Far East?

When we were jamming with some friends back in our school days, we had no intention to take this band to what it is now. The line-ups we experimented with initially didn’t work out so after a bit of online stalking, we found Zach and he bought in Seb, as they had played in bands together previously. In all honesty, if it weren’t for music then we wouldn’t know one another.

I understand in your early days you also went under the moniker of Bury The Ladybird. I can only imagine you sounded very different to your incarnation as Eva Plays Dead?!

We’re going back to our school days reference for this one. The name was a joke, which stuck, but when our sound started to verge into the early sounds of EPD and we started to gain some recognition, we figured that a rebrand would be better sooner than later.

Speaking of things historic, I was particularly intrigued by “1950’s Woman” from your new EP. It stands out in particular because of its narrative qualities. Can you tell us a bit about the origins of the story/relationship in the song and how the track came about?

The lyrics in our songs are generally very matter-of-fact and to the point. I didn’t have the easiest of times growing up – my Dad walked out, family in and out of hospital… just a few examples. My Grandparent’s were always there for me through the harder times and keeping the family together the best they could. They told me the most wonderful stories about their younger lives and they introduced me to Frank Sinatra and Ella Fitzgerald before I discovered rock and roll so I can thank them for my passion for music. The inspiration my grandparents have provided me is limitless. The Jazz artists they introduced me to really struck a chord with me and the genre is where I take most of lyrical influence.

You’ve got a host of live dates coming up in November and December. What can we expect from the shows? Can you share any plans?

We’re working on the set in rehearsals at the moment and we can’t wait to take it to the road! We’re playing all of the tracks from the EP, a few older tunes and a couple of new ones fresh out of the rehearsal room! We’ll be taking in to the studio early next year, so now is the time to hear it first really. If anyone came along to the last shows in July, they’ll also know that we don’t necessarily like to keep everything on stage throughout the set!

Are you looking ahead to 2016 and beyond yet? What’s the next target that you’d like to nail to the nearest wall?

We’ve got the studio booked for early 2016 and everything else is being worked on behind the scenes. It’s looking like we won’t be as busy on the touring front but it’s too early to say – we’re really good at accidentally booking gigs!

Eva Plays Dead will tour the UK this November and December:

Pick up tickets at evaplaysdead.com