Boss Keloid are back with an album more dense than the immeasurable singularity of a neutron star.

And yet absolutely everything has changed.

By taking a doom-laden metal template and remoulding it in their own kaleidoscopic image, Wigan’s finest purveyors of all things psychedelic and sludge-like have effectively reset the bar.

Building upon the heavyweight foundation and cult-acclamation of their debut full length The Calming Influence Of Teeth, on Herb Your Enthusiasm the ‘Keloid have stripped away the more frenetic math-based elements of their auricular tapestry and made audacious progress through the development of their production, arrangements and melody.

For beneath Boss Keloid’s spiked and leathery skin lies a pulsating progressive heart, sinewy and muscular guitars winding rhythmically through the sonic nether, rumbling percussive blasts crushing blood and bone through sheer force of will.

The temptation is to place Herb… in the canon of Clutch or Conan, the latter of whose own Jon Davis makes a guest appearance here on both “Chabal” and “Lung Mountain”, but while they work in the same aural space, the similarities between bands are only surface. 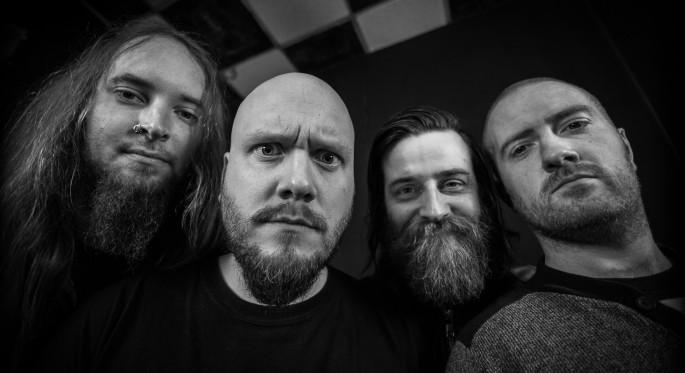 What ultimately impresses most about Boss Keloid’s new collection is the layers of sophistication that lie beneath the quake-inducing intensity. For all its nascent desire to pound everything into submission, Herb Your Enthusiasm is in many ways light, agile and dynamic on its feet, its ability to contriturate so total precisely because of its spacious production and clarity of detail.

Hurst’s ravaged and sand-blasted vocals add strength and texture to Adam Swarbrick’s worn and scabrous low-end across many of these cuts, and when the pair lock into a groove with Ste Arands’ drums and Paul Swabrick’s guitar on the like’s of “Escapegoat”, “Hot Priest” or the aforementioned “Axis Of Green” – the latter bolstered further by the synapse-firing inclusion of Eastern-tinged rhythms and chant-like vocal tones – the effect is paradoxically both electrifying and hypnotising.

To cut a long story short, I’m telling you this album’s bloody great.

At times more dense than the immeasurable singularity of a neutron star, at others more enlightening and expansive than the mind-altering nature of the cosmos itself, Herb Your Enthusiasm is – whisper it – a very early contender for album of the year.

You can pre-order ‘Herb Your Enthusiasm’ from the 26th of February and it will be released on the 8th of April via Black Bow Records. If you can’t wait that long for a sneak peak, check out the album’s video teaser below.