Wigan: a town that, it is believed, was part of the territory of the Brigantes during the period of classical antiquity, an ancient Celtic tribe that ruled much of northern England. The tribe took their name from the same etymological root as the goddess Brigantia, meaning “high” or “elevated”, and was often used in the settlement name Brigantium, translated as “high ones.”

The town is also home to the annual World Pie Eating Championship, usually held at Harry’s Bar on Wallgate, but we digress…

It is possible to harbor a romantic notion that the members of Boss Keloid, Wigan’s very finest purveyors of all things doom-laden, psychedelic and sludge-metal-like, are somehow descended from that elevated Celtic tribe, their new album, Herb Your Enthusiasm, occupying an intense and crushing space, yet also layered with expansive, mind-altering detail the like of which is all too uncommon in the sonic universe they operate in.

“Enlightened” ancestry leading to this delightfully brutal new sonic platter? We can but dream…

Combining metal, art and a wicked sense of humour into one all-conquering music-making unit, Boss Keloid and Skin Back Alley caught up ahead of the release of Herb Your Enthusiasm on the 8th of April.

Skin Back Alley: 2016 seems like it’s gearing up to be a big year for you. There seems to be real momentum for you with the new album, plenty of tour dates and notices from the likes of Metal Hammer and Rock Sound. How does it feel to you guys? A culmination of previous hard work? The start of a new stage in your music careers? Something else entirely?

Boss Keloid [Paul Swarbrick/Guitar]: It’s a natural and continual evolution for us. We don’t see it as a series of stages. We want to continually write, create and play new music that interests us and it’s obviously great to have positive coverage in the press along the way.

When you started out, did you dare to envision yourselves reaching the level of interest that you’re working at now?

We’ve always been focussed on creating new music that we’re proud of and are constantly trying to better ourselves as musicians and as a band. It’s cool that we’re at a point in time were a few more avenues have opened up for us in terms of gigs, exposure and press coverage.

Lots of UK bands find it necessary to head south to help move their career forward, but hailing from Wigan and working in the north of England doesn’t seem to have hampered you? Do you think your geography has posed any particular challenges during your time as a band?

On the contrary, within the north west and especially Manchester there is a lot of passion and hunger for live music and bands of a heavier ilk. We’re happy to be part of that. Of course, we’d like the opportunity to play more shows around the country which can sometimes be restrictive logistically. We have a few tours lined up for later on in the year which will see us venture into pastures new.

How did your relationship with Jon Davis, Chris Fielding and Skyhammer Studios come about? What influenced your decision to work with them?

We were aware of the high quality work that Chris has produced at Skyhammer and the vibe and tone he can capture on record. I got in touch with Jon who didn’t take long in convincing me Skyhammer was the place for us. We were positive Chris could give us what we wanted and make the record sound massive but also with great clarity and depth. He certainly did. We asked Jon did he fancy providing some additional vocals on a few songs that we thought would work well with his scouse battle cry over the top. His vocals compliment Alex’s really well on “Lung Mountain” and “Chabal”.

And was it therefore almost inevitable that you signed to Davis’ Black Bow Records?

Not necessarily. Jon asked for the finished album and then offered to release it, which is cool. We had a few other label offers but went with Black Bow. It is a relatively new label but already has a tasty roster of bands so we’re really pleased to be part of that.

The new songs seem to have a greater sense of depth and dynamism to them when compared with your previous album, The Calming Influence of Teeth. There also seems to be a greater focus on melody. Was that something you were specifically aiming for?

Most definitely. The last record had a lot of ideas, perhaps too many in hindsight. With the new songs we focussed on giving the riffs and vocals more room to breathe and incorporating a greater sense of melody and depth. We spent a lot of time getting the tone and vibe exactly how we wanted this time around.

The new material still feels as though it has more complex, progressive elements, but it seems as though the more frenzied math-rock elements have been paired back. Is that a fair observation?

Sure dude. The new songs feel a lot more cohesive and considered. In hindsight, the approach to crafting the songs from the last album felt a little contrived perhaps, with the focus on trying to cram as many ideas and riffs into a song as possible. The songs from the new album came together more naturally.

I know a lot of people who love a good pun. How did you settle on Herb Your Enthusiasm as the title of the new album?

It just popped into my head when driving home from work. We agreed pretty quickly that it would be the album title. We are keen gardeners. It’s a bit daft but we couldn’t pass up the opportunity to use it. 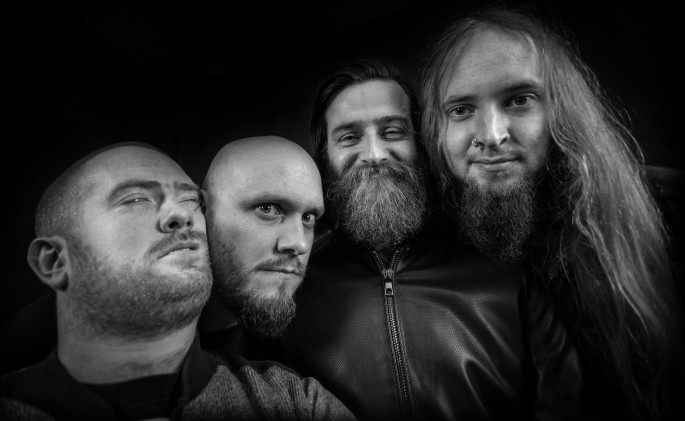 You’ve made no secret of the fact that you took the band name Boss Keloid from the Iron Monkey song of the same name. Has Iron Monkey’s brief but vital career influenced any other aspect of the Boss Keloid philosophy?

Iron Monkey created some pretty dark and sludgy music but also had a great warped sense of humour that came through in their music. These similarities can be drawn to our band. Humour and heaviness is very important.

Early reviews of Herb… seem to be placing you in the same canon as Clutch quite a bit. Never an insult to be compared to Neil Fallon and Co., but your sound draws on numerous influences. People might be surprised to hear you reference the likes of Snarky Puppy or The Carpenters in interview for example?

Everyone has their own frame of reference when defining our music, some are more applicable than others. Collectively, we have a wide range of tastes and influences and aim to draw on these as much as possible when crafting the songs. We are always focussed on keeping things interesting, heavy and dynamic.

Our sound has developed naturally without putting much thought or desire to fit into a specific genre or style. The song writing dynamic hasn’t really changed since day one. I have some riffs and ideas that collectively we craft and refine into a song structure until we’re all happy.

You seem to be able to maintain a healthy sense of humour in and amongst the work involved in putting out the new album. Would you say that’s important to you as a band? There seems to be a philosophy of taking the music seriously, but not taking yourselves too seriously?

Yes, definitely. We have a strong chemistry which is based around a shared appreciation of all things warped and humorous and it’s important to bring that into the music without it necessarily being obvious.

Tell us about the incredible cover art for Herb Your Enthusiasm. It’s an awesome piece of work and striking imagery. Who? What? When? How? Why? What does it represent for you?

The beautiful album artwork is courtesy of Ben Tolman. For me his work draws parallels to Hieronymus Bosch, one of my favourite artists, and his intricate surrealist and psychedelic depictions. The artwork should be left to the individual’s interpretation. It blows me away when I look at it and get lost in all its layers and detail. The more time you spend enjoying it, the more amazing little details you uncover, similar to how I view our album.

It’s been suggested that you’re a woolly jumper connoisseur. What makes a great woolly jumper and can we expect a Boss Keloid Christmas edition at your merch table this year? Perhaps with a nice green herb motif?

I enjoy a nice woollen jumper indeed. I have many which have been knitted for me by my wife’s Aunty. Pattern, texture, colour and fit are all very important. Herb Your Christmas jumpers will certainly be on the cards. Great suggestion dude.

We only ask a paltry commission, honest.

At the risk of entrenching a Wigan-based stereotype and inviting every possible Yorkshire jibe in return, do you guys each have a favourite type of pie that you can recommend?

Steak and ale, as it has meat and beer in it. A pie is only a pie if it is fully encased in the finest pastry.

What have you got in store through 2016? Presumably as much touring as possible behind the new album?

The album is released on the 8th April and we have a series of gigs lined up in April, June, August and October including an April support slot with Conan in Manchester, the Noiz All dayer in Manchester with Hang the Bastard and Witchsorrow in April, and a 5 date tour in August which will culminate at Riff Fest 2016, Bolton.

We’ll also be playing Mammothfest 2016 in October on the same line up as Conan, Black Moth and Bast. We’re also pulling together a tour for the end of the year too. The album’s first video for “Lung Mountain” will also be released March/April time.

Boss Keloid’s new album, Herb Your Enthusiasm, is released on the 8th of April via Black Bow Records. Pre-orders are available from the 26th of February via bosskeloid.bandcamp.com. You can read our review of the splendid platter of psychedelic sludge here, and check out the official album teaser video below.