LA’s AWOLNATION have revealed the official video for their new single “I Am.”

The track is lifted from the band’s “energised, angry and huge” most recent LP Run, released back in March and reviewed here.

The album was written, performed and produced entirely by musical architect Aaron Bruno. “There is not one second on the record that hasn’t been thoughtfully placed,” says Bruno. “Every single element serves a purpose.”

Check out the video for “I Am” below. The anthemic song is currently featured in the latest World of Red Bull campaign, which is currently running across North America and Europe and has quickly amassed over 7 million views online.


AWOLNATION are set to play the following live shows in the UK:

LA rockers AWOLNATION have released a lyric video for their new single “I Am.”

The song is lifted from the band’s second full length and critically acclaimed album Run, performed and produced entirely by AWOLNATION mastermind Aaron Bruno and described by Skin Back Alley as “energised, detailed, angry and huge.”

Accompanying the new lyric video is the news that the band will also be returning to the UK in August for a special show in Glasgow followed by appearances at this year’s Reading and Leeds festival.

Check out the video for “I Am” below. The song is released as a single on the 22nd of June.

Here are the new and notable releases for this week, 16th March 2015: 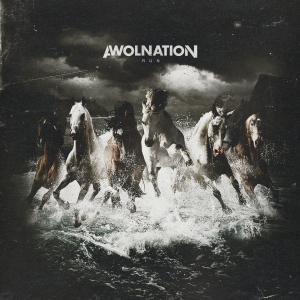 All of the above and many more are available via the Skin Back Alley Music Store, powered by Amazon.

“Detailed, energised, angry and huge. Alt-pop archaeologists will be picking over the minutiae of Run for weeks to come.”

Awolnation’s genius lies in Aaron Bruno’s ability to mash and mould music in unexpected ways to create soundscapes that result in a whole that is always greater than the sum of its parts. Previous multi-million selling single “Sail”, lifted from the band’s debut album Megalithic Symphony, crossed over in to the popular consciousness and brought the band in to a pop space that, by Awolnation’s own admission, they felt they didn’t belong in. Where will sophomore album, Run, take them next then?

The album’s title track is a prime example of their aforementioned boundary-breaking prowess. In it’s opening bars it sounds redolent of a slow-burning R&B pop chart hit. Yet by the time it draws to a close 4 minutes later, it has grown and morphed, wriggled and writhed its way in to a new and tight-fitting skin, the resulting slinky electro-metal pulse pounding in your ears like something Trent Reznor would have recorded in the early days of his career. The lyrical refrain of “I am a human being, capable of doing terrible things” just adds to the air of menace.

Those with a penchant for the dark tones of such EDM-tinged rock n’ roll might find the following track “Fat Face” a stark contrast when it first hits, its piano line delivering a warm and welcoming bed of chords over which Aaron Bruno sings of walking “to the rhythm of your heart.” Take a closer listen however, and lines about “casting shadows” and still being “bitter” begin to stand out. As Bruno yells his way through the second half of the song, his voice treated and abrasive in tone and texture, the whole thing is delightfully turned on its head.

Elsewhere the multi-faceted, progressive pop tendencies found in lead single “Hollow Moon (Bad Wolf)” deliver a stop-start thrash of a verse bolted on to a driving up-tempo radio-friendly chorus, the song rounding out in an explosive blast of guitar and electronics – capped with a highly charged emotional metal scream – that seem pre-destined to reduce stadiums to rubble.

Somehow, across its running time, Run manages to absorb, assimilate, chew up and spit out influences from across the history of rock, alternative and pop music – see the debt to the Beatles evident in the rhythmic and vocal stylings of “Jailbreak” or the Gary Numan-esque electro of “Dreamers” – and serve them up in striking, captivating and evocative new ways. It is almost as if Bruno has – by traversing left and right across the musical landscape – created a centre all of his own by virtue of the spaces in-between.

As a whole Run feels highly detailed and more darkly introspective than mega-selling debut Megalithic Symphony, and yet it still feels energised, angry and huge. It’s the kind of album that warrants many a repeated listen, and one that will have alt-pop archaeologists picking over the details for weeks and months to come.

You can watch Awolnation’s official video for lead single “Hollow Moon (Bad Wolf)” below. The band will play a headline show in London at the city’s Electric Ballroom on the 1st April.

Parent album Run is scheduled for launch on the 16th of March via Red Bull Records and is the follow up to the group’s previous hit LP Megalithic Symphony.

Run was performed and produced entirely by AWOLNATION mainman Aaron Bruno. Says Bruno of the new music: “There is not one second on the record that hasn’t been thoughtfully placed. Every single element serves a purpose.”

The full tracklisting for Run is as follows:

Check out the video for first single “Hollow Moon (Bad Wolf)” below and let us know what you think:

AWOLNATION embark upon a European tour in March, with confirmed dates as follows:

Pre-order bundles for the new album are available now via awolnationmusic.com