Iron Maiden frontman Bruce Dickinson has revealed that he will release his memoir in 2017.

The ‘Maiden vocalist and songwriter is planning to pen the work whilst on the band’s Book Of Souls world tour next year. The run of shows will see Dickinson pilot the band, their crew and gear around the globe in the biggest ever version of their touring aircraft, Ed Force One – a Boeing 747.

As if being the singer for the world’s biggest heavy metal band wasn’t enough, Dickinson will also have his experiences as a commercial airline pilot, author, sword fencer and businessman to draw on, as well as his recent battle with cancer of the tongue.

Says Dickinson of the book: “It was flattering to be approached to write a book about my experiences. It seems an appropriate time to do it, as I will have plenty of time on tour to work on a book.

“I’m sure flying the 747 round the world will add to the tale with some unusual scenarios!”

The book is scheduled to be published by HarperNonFiction in 2017 as a hardback, ebook and audio book, with a paperback edition following in 2018.

HarperCollins senior editor Denise Oswald says: “Bruce might quite literally be the world’s most interesting man. Being one of the greatest rock singers of all time is merely the beginning.

“His memoir, like his voice, is sure to set a new gold standard.”

Iron Maiden’s 16th studio album, The Book Of Souls, was released in September. The band will headline next year’s Download festival as part of their supporting world tour.

Iron Maiden frontman Bruce Dickinson has been given the all clear from cancer by his doctors.

The singer underwent a course of treatment earlier this year after a tumour was found on his tongue, resulting in ‘Maiden’s plans for their 16th studio album being put on hold.

Following a recent MRI scan, Dickinson has now been given a clean bill of health.

Says Dickinson in a statement: I would like to thank the fantastic medical team who have been treating me for the last few months, resulting in this amazing outcome.

“It’s been tough on my family and in many ways it was harder for them than me.

“I’d also like to send a heartfelt thanks to all our fans for their kind words and thoughts. I’m a firm believer in trying to maintain a positive attitude, and the encouragement from the global Maiden family meant a great deal to me.

He continues: “Right now, I’m feeling extremely motivated and can’t wait to get back to business as usual, as soon as I can!”

Iron Maiden manager Rod Smallwood has said that the band will not play any live shows this year in order to allow Bruce to get back to full strength. He has confirmed, however, that work on the final touches to the new album will now get back underway.

“For now, the focus will be on putting the finishing touches to the new Iron Maiden studio album and that is what we will be concentrating on over the coming weeks. The release however will definitely be this year,” he says.

“Meanwhile, I’d like to echo Bruce’s words and thank all Maiden fans. You have been incredibly patient, putting Bruce’s health and well-being first during this difficult time and the band and I appreciate all your positive support.”

Iron Maiden have released a statement revealing that frontman Bruce Dickinson has been treated for cancer.

The 56 year old has undergone a 7 week course of chemotherapy and is expected to make a full recovery.

Say Iron Maiden: “Just before Christmas, Maiden vocalist Bruce Dickinson visited his doctor for a routine check-up. This led to tests and biopsies which revealed a small cancerous tumour at the back of his tongue.

“A seven week course of chemotherapy and radiology treatment was completed yesterday. As the tumour was caught in the early stages, the prognosis thankfully is extremely good.

“Bruce’s medical team fully expect him to make a complete recovery with the all clear envisaged by late May. It will then take a further few months for Bruce to get back to full fitness.

“In the meantime we would ask for your patience, understanding and respect for Bruce and his family’s privacy until we update everyone by the end of May. Bruce is doing very well considering the circumstances and the whole team are very positive.”

We wish Bruce a speedy recovery! 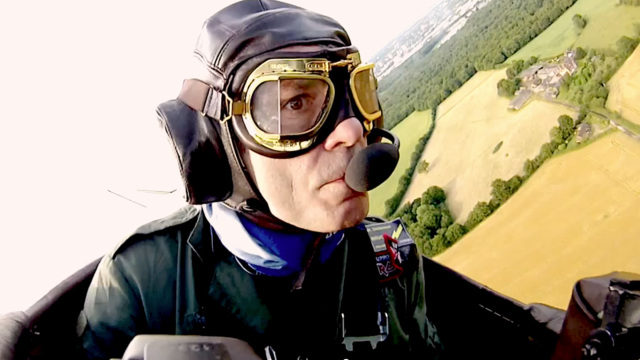 Dickinson, a qualified pilot, led a team of colleagues from The Great War Display Team in an aerial ‘battle’ over the festival site just hours before taking to the stage to headline the event.

Speaking ahead of the flight, Dickinson had previously said: “We’re determined to put on an unforgettable display for everyone.”

“The manoeuvres we’ll be performing are all based on true-life battles from a hundred years ago. What some of these fighter pilots achieved back then was nothing short of miraculous given the conditions they were working under and the seriousness of what was at stake.”

You can watch the footage of Dickinson flying at Sonisphere in his own Fokker DR1 Triplane below:

The British metal legends opened with “Moonchild” from their 1988 album Seventh Son Of A Seventh Son, with frontman Bruce Dickinson declaring the crowd to be “…a loud and rowdy and thirsty bunch…”

“Tonight is the last night of a three-year tour, its all been building to this. If we don’t get it right tonight then we never will,” he continued.

The remainder of the set – as with previous dates on the band’s gargantuan tour – was based almost exclusively on Maiden’s most well known material from their 80’s run of classic albums, including songs “The Trooper”, “The Number Of The Beast”, “Run To The Hills” and in the band’s encore, “Aces High” and “The Evil That Men Do.”

Ahead of playing “Revelations”, Dickinson revealed that the last time he had sung the song was at a charity concert in Canterbury Cathedral, accompanied by Jethro Tull. “That was much more sedate, but tonight we’re giving it the full bollocks,” he said. “That’s a technical term.”

Earlier in the day Dickinson had flown a Fokker DR1 triplane as part of an eight aircraft strong WWI dogfight re-enactment. The air show had been organised by Dickinson along with the Great War Display Team. The “fight” took place over a wooded area next to the main arena and was accompanied by sound effects and a live military brass band on stage. It was only fitting that Dickinson seemed to be victorious during the display, “shooting down” two other planes and performing a final flypast before Deftones took to the stage.

At the close of Iron Maiden’s set, Dickinson and the band took time to thank their crew, wider team, and the audience for “keeping it real.” Dickinson concluded by saying that “…what’s coming in the next few years is going to make it more real for you guys, believe me!”