Go to your nearest record store. Preferrably an independent, but given the urgency of the task before you we’re not going to be picky. Rush in through the front door, stride with purpose up to the counter and request in a polite but firm manner to purchase a copy of Let It Be by The Replacements. Once you have handed over the cash (or most likely swiped, tapped and wrapped, these days), return home forthwith. More haste, less speed people.

Walk in to your abode, wherever it may be. Turn on the power to your stereo equipment / computer / other generic listening device. Put the CD in to the appropriate tray. Plug in your headphone jack and position the headphones themselves upon your own noggin in the preferred position. Adopt your listening pose, turn up the volume to a loud – but still healthy! – volume.

Released in 1984, Let It Be seems to be precisely the sort of album that would have been a monstrous success had it been released ten years later. Utterly ragged yet unbearably melodic, it is chock full of wry observations about life in the margins. The album captures the moment when Paul Westerberg’s songwriting developed into something rounded and beautiful. The music and playing have come along, too since the days of their sloppy hardcore debut, Sorry Ma, Forgot to take out the trash.

It’s the raw passion and desperation that carry the day. Westerberg seems to sum it up in the mini-tornado of We’re Comin’ Out: “One more chance to get it all wrong / One more chance to do it all wrong / One more night to get it half right.” The band feel as though they are living right on the edge. This is the last chance they have to prove what they’re worth. And boy do they prove it.

Following two earlier, largely ignored releases, the album proved to be the ‘Mats critical crossover. Here was the ultimate balance between high and low brow. Just enough snotty, brash attitude to keep ‘the kids’ happy; just enough thought and emotion to please those beyond their adolescence. Where else would you find two minutes of rock n’ roll bluster along the lines of Tommy Gets His Tonsils Out, alongside the wracked, heart-on-sleeve, acoustic-led Unsatisfied and still have it all seemingly hold together (just.)

Westerberg’s throat must have been an open wound after recording some of these songs. The delicate balance between laceration and heart molestation is what brings to mind the grunge phenomenon that was Nirvana. Not only did the Seattle rockers seem to take some cues from the sonics of Let It Be, the whole template seems to be there in some primitive, primordial way. But just when you’re starting to take this album seriously, along comes Gary’s Got A Boner to bring you back down to earth with a bump (and a childish snigger.)

The Replacements went on to sign with Sire records and released what many consider to be their masterpiece, 1985 album Tim. But it was here, a year earlier, that so many fell in love with the ramshackle brand of rock n’ roll that the ‘Mats dealt in to such great effect. As such, it remains to many the record that captures that time in their life; that moment of coming of age. For it is truly a coming of age LP.

Now skip back to the beginning and listen again. If you don’t like it, don’t take it back to the store from which you bought it. Give it to someone else with the good sense to love it in the way that it deserves.

Find out more about The Replacements at their official website
You can buy the album from: The Skin Back Alley Music Store.

Carey will play with the band at a handful of live shows in September, and at Riot Fest in Chicago and Denver. Alexander is expected to be well enough to occupy the stool once more sometime during October.

Speaking to Rolling Stone, Pirums’ Les Claypool said: “The mighty Tim ‘Herb’ Alexander is a polyrhythmic viking of extreme and unique talent so the one person that we thought could step into his shoes and do it justice is the one and only Mr Danny Carey.”

“Whereas Herb is the stocky, Easter Island-faced, boulder of a drumming human, at nearer to seven feet, Danny Carey is the mighty redwood tree of percussion – towering over his kit like a golden-haired noble sequoia.”

“I can’t wait to see that menacing grin of Danny’s shine out as we pound our way through Here Come the Bastards and Those Damned Blue-Collar Tweekers. He’s a dear old friend and we are extremely excited to have him aboard, and I would wager we are equally if not more intrigued than most by what kind of sounds are going to come out of the three of us once we actually get in a room together and do more than just consume fancy booze.”

Claypool said that Primus chose to go through with the live shows in order to help give Alexander some financial relief whilst he recovers from his surgery. The Primus drummer suffered a minor heart attack a few weeks ago and had to undergo a triple heart bypass.

Claypool adds: “When Tim had a minor heart attack a few weeks back we were all startled. When he went in for an angioplasty the next morning and they said he needed a triple bypass we were all shocked. Tim is the ‘Ginseng drummer’ for a reason. He was always the non-meat eating, teetotaling, mastodon of a man who could throw a football over a mountain, chuck a curve ball at 89 miles per hour and could play his drums for hours on end without breaking a sweat, but unfortunately genetics and a taste for dessert have a way of catching up and kicking one’s balls.”

Primus are set to release their new album, Primus & The Chocolate Factory, on the 21st of October. 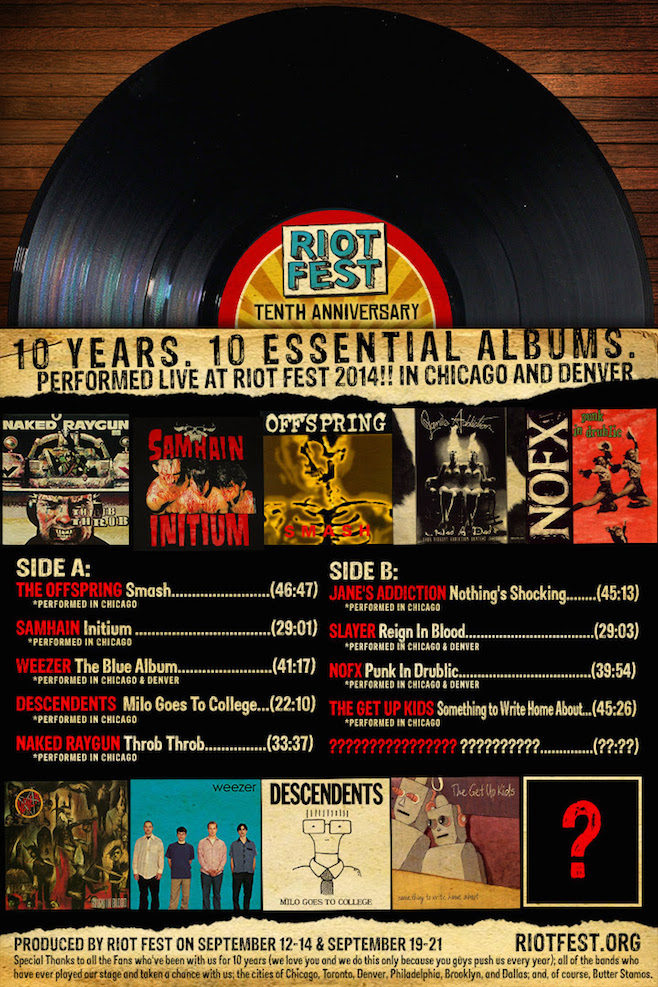 Riot Fest organisers have announced a new spin to this year’s shows.

To celebrate the festival’s 10th anniversary, 10 bands will be playing their classic albums in full.

Performers will include Slayer (Reign in Blood), Descendents (Milo Goes to College), Weezer (The Blue Album), Jane’s Addiction (Nothing Shocking), the Get Up Kids (Something to Write Home About), NOFX (Punk in Drublic), the Offspring (Smash), Glenn Danzig’s reunited band Samhain (Initium), Naked Raygun (Throb Throb), with one more act still be confirmed.

Some records will only be performed during the festival’s Chicago dates, including those by Jane’s Addiction, the Get Up Kids, Descendents, the Offspring, Samhain, and Naked Raygun. The rest will be performed in both Chicago and Denver. 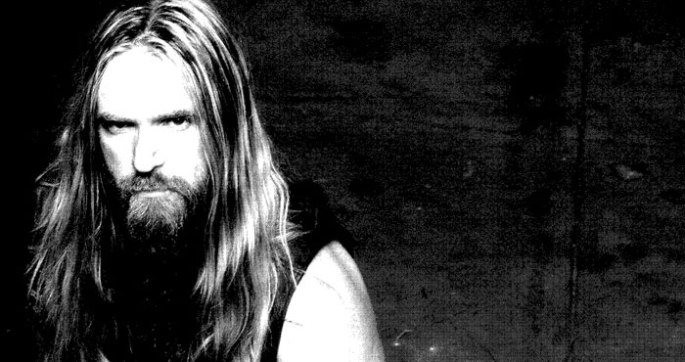 Legendary guitarist Zakk Wylde is set to be reunited with a guitar that was stolen from his tour bus in March.

The Black Label Society frontman, and former Ozzy Osbourne and Pride & Glory axe-slinger, was the victim of theft for the first time in his music career when an opportunist thief took the guitar from Wylde’s unlocked tour bus. The pelham Blue Gibson LP custom that was taken was valued at $10,000.

It’s been recovered, however, after a Chicago pawn shop owner paid $50 for the guitar, then began to suspect that it might be worth an awful lot more.

Shop owner Randy Cohen, who also owns the store featured in reality TV show Hardcore Pawn: Chicago, says his staff were aware of the standard theft notice that had been circulated after the crime took place.

But he tells the Chicago Tribune: “I forgot about it – that happens every day.”

The guitar was very quickly identified after Cohen took it to a local music store to be checked out. It was then handed over to Chicago police, along with details of the seller.

Wylde had previously said of the theft: “Nothing gets stolen off tour buses – unless you don’t lock them. Rule number one: when you get off, lock the door and check the handle.”