Here are the new and notable music releases for this week, 13th October 2014:

Blood In Blood Out, Exodus

You can buy all of the above albums (and many more!) at the Skin Back Alley Music Store. 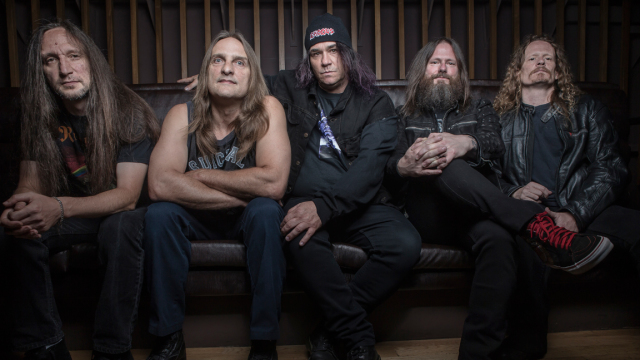 Thrash legends Exodus have released a video for the title track of their new album.

Guitarist Gary Holt describes “Blood In, Blood Out” thus: “Time to let a fast one out of the bag! It’s fast, raging thrash. One of many on the new disc. Bay Area sickness to slap you upside your face!”

The track features the return of vocalist Steve ‘Zetro’ Souza and comes hot on the heels of a previous new song, “Salt The Wound”, which includes a guest appearance from Kirk Hammett. Hammett left Exodus in 1983 to join Metallica, having never recorded a studio album with the group.

You can watch the video to “Blood In, Blood Out” below:

Blood In, Blood Out the album is scheduled for release on the 13th of October via Nuclear Blast.

The song is the band’s first new material with vocalist Steve Souza since 2004, and features a guest solo from none other than Metallica’s Kirk Hammett.

Take a listen to the track below!

Exodus’ new album, Blood In Blood Out, will be released via Nuclear Blast on the 13th of October.

Exodus’ guitarist Gary Holt has spoken out after a fan of the band was jailed for posting lyrics to one of their songs on Facebook.

James Evans, 31, will appear in court next week to answer a charge of ‘terrorist threatening’ after posting lyrics to the Exodus song “Class Dismissed (A Hate Primer)” on his Facebook page.

He wrote: “Student bodies lying dead in the halls, a blood splattered treatise of hate. Class dismissed is my hypothesis, gun fire ends in debate.”

Police say that they and other law enforcement agencies were contacted following Evans’ post, and officers were sent to arrest him in Muhlenberg, Kentucky.

Evans’ sister Ashelynn says James often posts lyrics on Facebook, adding: “We couldn’t believe you could get in trouble for that.”

Holt says in a statement: “The idea that an individual in this great country of ours could be arrested for simply posting lyrics is something I never believed could happen in a free society.”

“Class Dismissed (A Hate Primer) was written as a view through the eyes of a madman, and in no way endorses that kind of fucked up behaviour.”

“As some of us in Exodus are parents, of course these things hit close to home. It’s every parent’s worst fear. These moments are the stuff of nightmares – and life, as well as music, isn’t always pretty.”

“But when we start to overreact to things like lyrics and start arresting people, we are caving in to paranoia and are well on our way to becoming an Orwellian society.”

The song was written in response to the Virginia Tech massacre in 2007, in which 33 people were killed by Seung-Hui Cho. The band stopped playing it live for a time after 28 died during the Sandy Hook shootings in 2012 because they “did not want to seem insensitive.”

Evans is expected in court on Wednesday.

Exodus will release their 10th studio album, Blood In Blood Out, on the 13th of October.