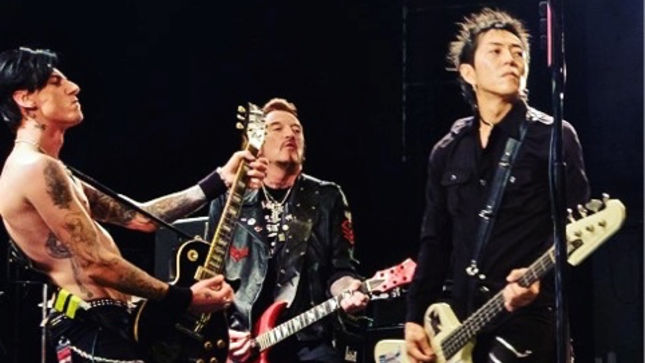 The live shows will see Ginger chalk up 18 appearances across just 16 days in July, supported at all shows by US power pop titan Ryan Hamilton & The Traitors.

Opening the shows at Leeds, Newcastle & Cambridge will be Danny McCormack’s new band, The Main Grains, the first time that Danny and Ginger have shared a stage in years.

In London Ginger’s own Hey! Hello! support, while the remaining shows are opened by the UK’s very own rock behemoth Massive Wagons. Ginger is accompanied on these dates by Toshi (bass), Denzel (drums) and Conny Bloom (lead guitar & vocals).

Says Ginger: “I can’t wait to get onto a bus again and back on the road. 18 shows back to back, bring it on! After being in the studio for eight months, recording three albums together, this is going to feel like a holiday.”

Tickets for all shows are available here, with confirmed dates as follows:

UK hardcore quartet HECK have been added to the lineup for this year’s inaugural Ginger Wildheart Show, taking place this Friday.

The announcement follows hot on the heels of the news that Ginger’s band Hey! Hello! had cancelled their set at the event after the departure of vocalist Hollis from the band.

As Ginger explains “The Ginger Wildheart Show is something that we intend to carry on in the future. I love the idea of replicating the old cabaret evenings with five different bands. The maiden voyage of this show, April 1st, will feature my current favourite bands on the circuit today”.

The super-charged Ginger Wildheart Band will be heading the proceedings, along with very welcome turns from Heck, Dirt Box Disco, Scaramanga Six and Tropical Contact.

The Ginger Wildheart Show takes place at London’s O2 Forum on the 1st of April and tickets are available now.

HECK recently released a video for their bone-crunching new single “Good As Dead” which you can watch below.

Hey! Hello! have had to cancel their UK tour following the departure of singer Hollis from the band.

The news comes as the group release a new video for their track “Let’s Get Emotional.”

Say Hey! Hello! in a statement revealing the news: ““We are bitterly sorry to see our singer leave the band at this point, but we respect her decision and wish her nothing but good luck in the future.

“Right now, our main concern is finding a new front person – male or female – to lead our band to world domination.

“If you have the star quality that Hey! Hello! needs then get in touch at heyhellotoo@gmail.com

The world is waiting for you.”

Hollis has also released a statement explaining her decision: “As everyone knows I recently became the new singer of Hey! Hello! I was privileged enough to do shows with Hey! Hello! and work alongside Ginger and the rest of the band and record the Hey! Hello! Too! album which has recently been digitally released.

“I recently made the decision to relocate back to Los Angeles. While living in England I was ready and able to do everything in my power to become a permanent member of Hey! Hello! Now, due to geographical restrictions along with commitments to Love Zombies it is no longer a long term possibility and it isn’t feasible for me to remain in both bands.

“I want to thank Ginger and the band for the opportunity they have given me to be part of such a wonderful band and experience. I have enjoyed every moment and wish everyone the very best. I am again truly sorry for the inconvenience and disappointment this may have caused.”

X-Ray Touring , Hey! Hello!’s Live Agent have also stated: “It is disappointing that things did not work out with Hollis. Unfortunately, it was becoming more and more difficult in a geographical sense for her to continue to be in the band. We wish Hollis the best of luck in her endeavours, and her future with Love Zombies and also wish Hey! Hello! much luck in securing a replacement as soon as possible. Unfortunately this means however, that the upcoming tour in April/May has had to be cancelled.”

Fans should contact their point of purchase for ticket refunds. All Hey! Hello!’s headline tour dates have been cancelled, but “The Ginger Wildheart Show”, taking place on the 1st of April at London’s O2 Forum, will go ahead as planned without Hey! Hello! on the bill.

Meanwhile the band have released a video for their new track “Let’s Get Emotional.” You can check out the adrenaline thrill ride below.

Taking place at London’s O2 Forum on the 1st of April, The Ginger Wildheart Band will be joined on the night by Dirt Box Disco, Hey! Hello!, The Scaramanga Six and Tropical Contact.

As Ginger explains: “The Ginger Wildheart Show is something that we intend to carry on in the future. I love the idea of replicating the old cabaret evenings with five different bands. The maiden voyage of this show, April 1st, will feature my current favourite bands on the circuit today.”

He adds: “I have fallen in love with Dirt Box Disco recently, Scaramanga Six are simply one of the greatest bands that Britain has ever produced and Tropical Contact come fresh from a ludicrously successful Pledge Campaign where they scored over 800% of their goal.

“Hey! Hello! are, of course, my new band and this will be our first show on the year. It’s a stunning show that you should cancel any and all previous arrangements to attend. Please don’t regret missing this. You deserve it.“

Tickets for The Ginger Wildheart Show are available now.

Following the event, Ginger’s new band, Hey! Hello!, head out on a UK tour. Dates are as follows:

You can check out the band’s video for new track “Automatic Love” below.

Hey! Hello! have released a video for their new track “Automatic Love.”

Say the band: “The video is a deliberately stark introduction of the new line up, complete with new vocalist Hollis. We didn’t want anything flash, and preferred to let the music be the main focus. It’s raw, it’s loud and sounds like the weekend.

“This is the sound of partying, sex, trouble, fun, hangovers and extreme behaviour of all persuasions, take from that what you will. We’re bringing rock’n’roll back in 2016, and you better believe we mean that 100%.”

The band have also confirmed a series of tour dates for April. The shows were rescheduled following the news in December that guitarist Ginger Wildheart was suffering with acute depression.

Check out the video and tour dates below!