Jason Isbell has released a lyric video for the title track from his forthcoming new album Something More Than Free.

The album is due for release this Friday the 17th of July, in line with a new global agreement to schedule new music releases on Fridays the world-over.

Something More Than Free was produced by Dave Cobb and recorded at Nashville’s Sound Emporium with Amanda Shires and regular collaborators The 400 Unit (bassist Jimbo Hart, drummer Chad Gamble, keyboardist Derry deBorja and guitarist Sadler Vaden.) The LP will be the follow up to Isbell’s critically acclaimed 2013 release Southeastern.

You can check out the video for “Something More Than Free” below. Jason Isbell will be playing the following dates at Nashville’s historic Ryman Auditorium later in the year: 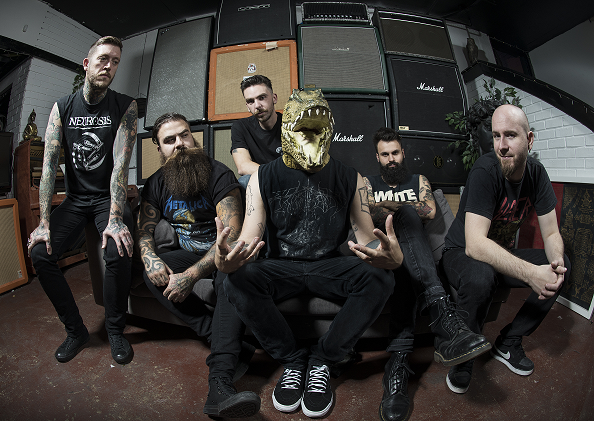 Krokodil have unveiled a lyric video for their track “Skin Of The Earth.”

The track is lifted from the band’s debut album, Nachash.

Krokodil have also been added to the bill for this year’s Download festival at Donington Park on the 12th-14th of June. The announcement comes in addition to their confirmed at appearances at Temples Festival in May (UK), Tuska Open Air in Finland (June), FortaRock in Holland (June) and MetalDays in Slovenia (July).

Check out the new lyric video for “Skin Of The Earth” below:

Hot on the heels of sharing new track “Psycho”, Muse have released a lyric video for another new song “Dead Inside.”

The track is set to feature on Muse’s forthcoming new album, Drones, scheduled for release on the 8th of June.

Frontman Matt Bellamy says of the song: “This is where the story of the album begins. The protagonist loses hope and becomes vulnerable to the dark forces introduced in Psycho and the next few songs – before eventually defecting, revolting and overcoming these dark forces later in the story.”

You can watch the video for “Dead Inside” below:

Von Hertzen Brothers have released a lyric video for their new track “Trouble.”

The song is the second tune to be shared from the band’s forthcoming new album, New Day Rising, scheduled for release on the 23rd of March via Spinefarm Records.

An official video for the title track was released back in February.

Siblings Mikko, Kie & Jonne Von Hertzen recorded the album with regular drummer Mikko Kaakkuriniemi and keyboard player Juha Kuoppalaat at The Farm in Vancouver. Grammy-nominated Canadian producer Garth ‘GGGarth’ Richardson (Biffy Clyro, Rage Against The Machine and more) was in the producer’s chair and the album was mixed by Randy Staub (Metallica, Alice In Chains.)

Says Mikko of the new album: “Working with GGGarth and Randy felt like we finally got to operate with true maestros – the crème de la crème of Canadian know-how. All bullshit aside, the end result is all that matters, and quite frankly, I’ve never been prouder of anything we’ve done. Together we raised the bar to a whole new level, and only time will tell if we’ll ever be able to beat that or raise the bar even more. I mean, we are talking some serious Sergey Bubka heights here!”

Check out the lyric video for “Trouble” below:

The song is lifted from the band’s latest album, Tellurian, released last year via Spinefarm Records.

Produced by Soen guitarist Joakim Platbarzdis, mixed by the legendary Grammy Award-winning David Bottrill (Tool, Smashing Pumpkins, Muse, King Crimson, etc.) and mastered at Bob Ludwig’s Gateway set-up in the US by Adam Ayan, Tellurian is described as “pushing the boundaries in terms of musical scope, the whole thing shot through with the confidence of a band who have found their voice.”

Check out the video for “Kuraman” below and be sure to let us know what you think!

Soen embark on a European tour starting tonight in Finland, with confirmed dates as follows: