The track is scheduled for release this month via Clue Records and the accompanying clip has been no less than two months in the making, delivering a discombobulating, angst-fuelled journey through a mind-bending mix of animation and reality.

NARCS guitarist Joe explains: “’Pig’ started off as an anecdote we heard about a chance meeting between a man and his childhood idol in a supermarket. This idol was the reason the fella had gone into the same line of work (I think it was acting) and this guy was starstruck. When he finally plucked up the courage to go and speak to him, he noticed that the guy just had a crate of booze. He asked him: ‘Are you so-and-so?’ And the guy didn’t even look up, he just said: ‘What’s left of him, yeah.’

“It morphed into this sort of self-loathing, angry song about wanting to mould someone into something that suits you better and how that’s a bit of a violent process,” he adds. “John (bass) wanted to call it ‘I Won’t Kill The Pig, But I’ll Eat The Meat’ which we liked but felt was too much for a title, so we shortened it while we were working on it. We were on the verge of changing it until revelations that the Tory scum used to fuck pig’s faces for fun. Pretty ideal really.”

Check out the video – which contains flashing images and stroboscopic sequences – below:

“Pig” was filmed, animated & edited by Tommings and Sean Pearce and was recorded by Ed Heaton.

The track will be released via a download code, available in 90 ‘Pig Crackers’ from NARCS’ live shows. These pulling crackers contain a paper hat, joke, pig ornament & download code for “Pig” and other songs. 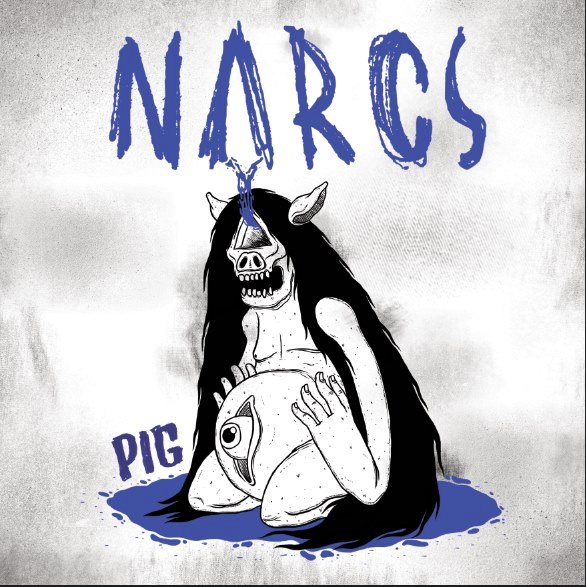