LA metal band My Ruin have re-released their Throat Full Of Heart album – for free!

The 2008 album was originally released via the band’s own imprint, Rovena Recordings, and distributed in the UK by Cargo.

As frontwoman Tairrie B. Murphy explained:”Although this album was critically acclaimed, unfortunately the distribution we had hoped to achieve through Cargo was disappointing to say the least and it was very difficult for fans to find in stores at the time of its release. When it did finally come out in the US, it was only available as an import and even harder to find. It was also ridiculously expensive and not available worldwide as promised by Cargo.”

“Being that we now own the rights, we want EVERYONE to have a chance to finally hear this album which we remain very proud of and which has gone under the radar to some extent,” she added.

The decision to re-release the album also comes on the 8th anniversary of a fateful event that dramatically altered the course of the recording and the music that would eventually appear on Throat Full Of Heart. The night before recording sessions were due to begin, Tairrie had a night off following pre-production in order to go to dinner with friends:

“After dinner, one of my friends offered to drive me home. I had no idea she was intoxicated because she seemed fine,” said the vocalist via My Ruin’s Facebook page. “Within just minutes of getting into her car and driving down Santa Monica Blvd, we crashed.”

“She swerved and hit a street sweeper which was parked and a huge metal rod ripped through the passenger side open window and came straight for my neck which I somehow managed block with my left forearm… The rod tore open my arm from the elbow to the wrist underneath and punctured a wide deep hole in the top.”

Following extensive surgery – before which Murphy had been warned she may lose her arm owing to the extent of the injuries she had suffered – Tairrie began the long road to recovery. The band had recorded the music for the new album at their frontwoman’s request, and miraculously only Tairrie’s own vocal sessions were delayed.

“I laid the vocals for this album while still heavily bandaged and full of pain killers before my final skin graft surgery,” says Murphy now. “During this time, I decided to re write the lyrics for one of the last tracks of the album while in the studio. This became “Through the Wound” that also happened to contain the words which inspired the album title and my personal anthem of strength and recovery which still brings back some heavy memories when I listen to it today.”

You can grab your own copy of Throat Full Of Heart via My Ruin’s Bandcamp page, where the band have also made available a very limited set of just 12 physical signed copies of the album that also contains the 2hr behind the scenes bonus DVD.

Watch the official video for Throat Full Of Heart’s lead track, “Ready For Blood”, below: 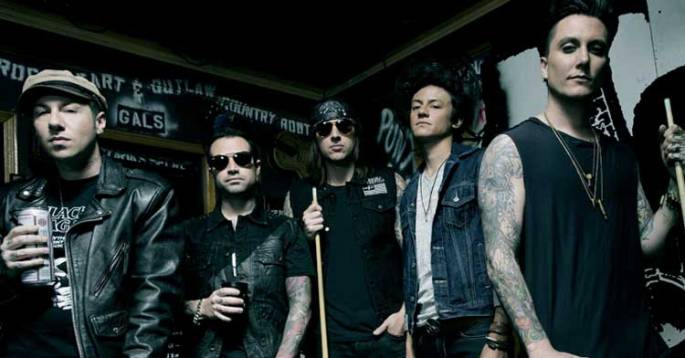 Avenged Sevenfold have confirmed that they are to re-release their seminal 2003 album, Waking The Fallen.

Waking The Fallen: Resurrected is scheduled for release on the 26th of August – exactly 11 years after the original album.

The …Resurrected edition will be released through Hopeless Records and will feature the original album, 11 previously unreleased tracks, a 30 minute feature film, music videos and more.

Check out the trailer below to see what you’re in for:

The full tracklisting for Waking The Fallen: Resurrected is as follows:

To pre-order the album, including the exclusive pre-order only tracks detailed above, click through to Hopeless Records.

Kiss have confirmed the release of a 40th anniversary vinyl box set.

The band will also embark on a co-headlining tour of the US this summer with UK rockers Def Leppard. The two bands will hit the road on the 23rd of June and will play a series of live dates running through until the 31st of August. The tour is partnering with US military support foundations and will offer discounted tickets to US service personnel.

A set of vinyl re-issues of individual albums will start in March and will come to an end in June. A double CD, Kiss 40, will also be released.

The full inventory of Kissteria: The Ultimate Vinyl Road Box is as follows:

The release schedule of individual vinyl re-issues is as follows:

May 26: Rock And Roll Over, Alive III, Music From The Elder, Crazy Nights, Hot In The Shade, Alive: The Millennium Concert, Carnival Of Souls: The Final Sessions

You can find out more about Kissteria here.