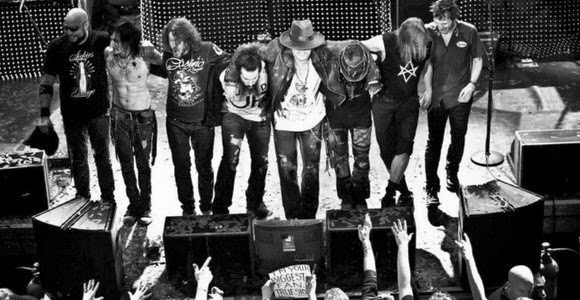 Guns N’ Roses frontman Axl Rose has confirmed the existence of not one, but two new albums of GN’R material.

Speaking to Revolver magazine, Rose confirmed that the band have finished recording the follow up to their 2008 album, Chinese Democracy, and that a Chinese Democracy remix album is also complete.

“We recorded a lot of things before Chinese was out,” said the singer. “We’ve worked more on some of those things and we’ve written a few new things. But basically, we have what I call kind of the second half of Chinese. That’s already recorded. [The remix album has] been done for a while, too.”

His last public appearance was to accept the Best Vocalist award at Revolver magazine’s 2010 Golden Gods Awards ceremony. In tribute to the late singer, Revolver have posted both his acceptance of the award and his final interview with Slipknot’s Corey Taylor online.

You can watch them below.