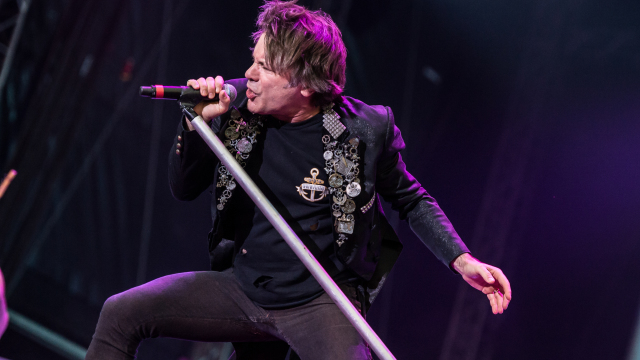 The British metal legends opened with “Moonchild” from their 1988 album Seventh Son Of A Seventh Son, with frontman Bruce Dickinson declaring the crowd to be “…a loud and rowdy and thirsty bunch…”

“Tonight is the last night of a three-year tour, its all been building to this. If we don’t get it right tonight then we never will,” he continued.

The remainder of the set – as with previous dates on the band’s gargantuan tour – was based almost exclusively on Maiden’s most well known material from their 80’s run of classic albums, including songs “The Trooper”, “The Number Of The Beast”, “Run To The Hills” and in the band’s encore, “Aces High” and “The Evil That Men Do.”

Ahead of playing “Revelations”, Dickinson revealed that the last time he had sung the song was at a charity concert in Canterbury Cathedral, accompanied by Jethro Tull. “That was much more sedate, but tonight we’re giving it the full bollocks,” he said. “That’s a technical term.” 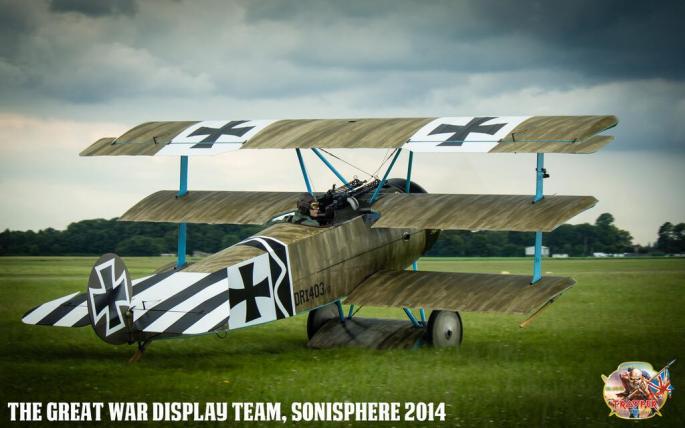 Earlier in the day Dickinson had flown a Fokker DR1 triplane as part of an eight aircraft strong WWI dogfight re-enactment. The air show had been organised by Dickinson along with the Great War Display Team. The “fight” took place over a wooded area next to the main arena and was accompanied by sound effects and a live military brass band on stage. It was only fitting that Dickinson seemed to be victorious during the display, “shooting down” two other planes and performing a final flypast before Deftones took to the stage.

At the close of Iron Maiden’s set, Dickinson and the band took time to thank their crew, wider team, and the audience for “keeping it real.” Dickinson concluded by saying that “…what’s coming in the next few years is going to make it more real for you guys, believe me!”

Nine Inch Nails’ music has always seemed like the soundtrack to a dystopian nightmare world full of pre and post-millenial angst, the ‘sturm und drang’ of a failing global economy based on a model of mass production, and the sinister and quiet creep of the oncoming digital age.

Perhaps with the exception of the original master of Pretty Hate Machine, which has the unmistakable sound of it’s late 80’s inception, all of Trent Reznor’s albums as NIN sound timeless, and every single one of them remains prescient, challenging and highly relevant.

Before this leg of NIN’s tour began, naysayers were being needlessly critical of Reznor’s decision to play the larger arenas of the world. Why would an ‘alternative’ industrial rock band play venues associated with a mindset of corporate capitalism; atmosphere-free domes more suited to sporting events?

Clearly those naysayers have never been to a Nine Inch Nails arena performance.

Reznor had promised that NIN’s aim with these dates was to deliver a more “low key” and “agressive” show with just a four piece band, rather than the more elaborate eight piece band that had been exploring new material from the Hesitation Marks album during previous dates. And that’s precisely what he and his band mates do at the Phones4U Arena in Manchester. 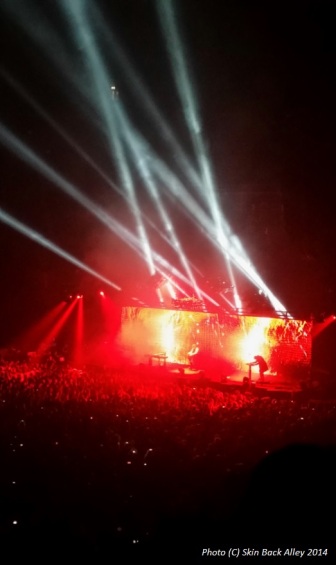 From the opening one-two of “Me I’m Not” and “Copy of A”, the 20 song show doesn’t let up across a career spanning set incorporating material from the entirety of the band’s 25 year history. In fact, just four songs from last year’s new album make an appearance.

The sheer size of “1,000,000”, “Letting You”, “March of the Pigs” and “Piggy” carry the show forward on the strength of their enormous shoulders, each and every song filling the cavernous arena and whipping the thousands strong crowd into a frenzy. The songs are accompanied by a spectacular visual installation, including an impressive lighting rig and a rear screen for video projection that lowers and raises at strategic points to meet the demands of each piece of music.

The stage proves to be a dynamic entity then, and one that allows Reznor and his crack team of multi-instrumentalists to navigate it at will as it expands and contracts. Ilan Rubin proves an astonishing and powerful force behind the live acoustic drum kit as it appears for those songs that require it’s presence, and both Alessandro Cortini and Robin Finck seem as adept at keyboards and electronics as they do at their respective six stringers.

Music from the band’s extensive back catalogue continues unabated until mid-way through the set when The Downward Spiral classic “Closer” makes it’s appearance. The assembled throng sing along to the now notorious lyrics, prompting Trent Reznor’s only between-song banter of the hour and three-quarters the band play. “Thank you”, he says succinctly.

Manchester is then treated to a Hesitation Marks trilogy, with “Find My Way”, “Disappointed” and “Came Back Haunted” following each other, one after the other. Despite the new album’s laser focus on electronics over guitars, the new songs are greeted with rapture, feel just as powerful as their predecessors, and don’t seem at all out of place in the running order. 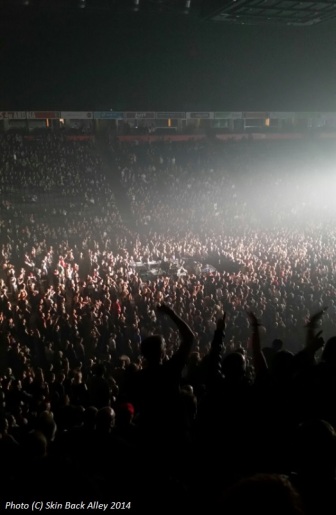 It’s clear that the show’s sound engineers have done their job extremely well, too, as the quality of the sound within the arena is remarkably strong, helping the batch of songs that follow build upon the palpable atmosphere of excitement and reverie, and nail shut the coffin on those pre-tour cranks. “How do you take a big place designed for sports shows and find a way to turn it into something intimate and interesting?”, asked Reznor when these tour dates were announced. “That’s a question we’re constantly trying to deal with. And, I think we’re quite successful at it right now.” On this show’s evidence, damn straight they are.

Reznor’s assertion is a view that doesn’t fade as the concert builds to the final song of the main set, debut album Pretty Hate Machine’s colossal “Head Like A Hole.” It’s five minutes of relentless energy assault the crowd in the best possible way, leaving one gig-goer audibly screaming her love for the band and pleading for more. Nine Inch Nails’ logo is now writ large on the stage’s screen, signalling the end of proceedings. But the fact that the house lights don’t yet come up is telling.

Just a few minutes later, the arena is bathed in golden light, the band silhouetted against a firey backdrop projected on to the screen behind them. The brooding menace of “The Day The World Went Away” builds in the arena’s PA, and the audience are once again vocal in their appreciation and applause.

The only question that remains then, is “Will they or won’t they?” The answer is that they will, and against a rear projection of poisonous reptiles, predatory insects and the horrors of war inflicted upon the human race by our own kind, Reznor and Co. work through a quietly tense, powerful and moving rendition of “Hurt.”

If there is a band in the world more capable than Nine Inch Nails of taking a venue the size of the Phones4U Arena, and filling every inch of it with the overwhelming force and emotional power of their music, then we are yet to find them. Their newly stripped back set-up is at once visually arresting, sonically staggering and, as yet, unmatched. The show is another fine example of why Trent Reznor’s music has endured for a quarter of a century, and will no doubt endure for a considerable time to come.

Encores:
“The Day the World Went Away”
“Hurt”