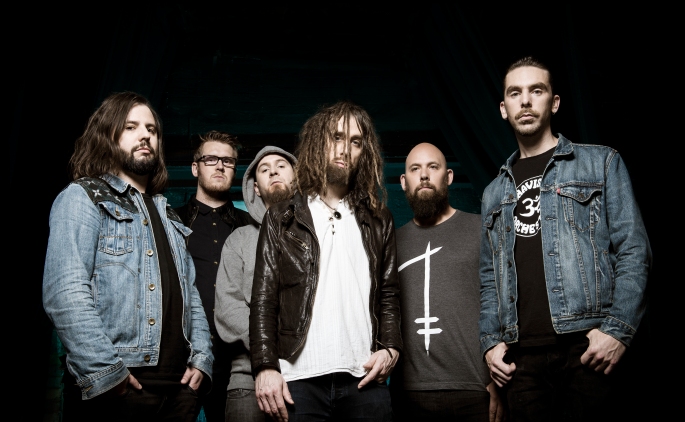 The run of shows will see them playing arenas across the UK as well as 2 nights at London’s Alexandra Palace.

Vocalist Mikee Goodman comments: “It’s insane to be supporting someone as huge as Slipknot and playing arenas every night! We’ve never had this kind of opportunity before! I remember when they first came out, they changed the scene. We’re fans, so it’s an honour to be asked to tour with such a band!”

SikTh will play the following dates with Slipknot and Suicidal Tendencies:

The band released their new mini-album, Opacities, in December last year on Peaceville to critical claim. Recorded at Lincoln’s Chapel Studios and produced by Dan Weller and Justin Hill, Opacities was described by guitarist Dan Weller as a “…more thoughtful, heavier, more refined” record, demonstrated in the video for “Philistine Philosophies”, directed and created by Mikee W Goodman.

Slipknot have released a video for their track “XIX.”

The video is accompanied by the news that Slipknot will return to the UK next February for four arena dates. Says frontman Corey Taylor: “Any time we get the chance to come over to the UK, it’s awesome. Hopefully the fans have as much fun as we do.

“We’ll be putting together a great set for them, and as we fill out the bill with bands, we hope the excitement gets even bigger.”

You can watch the video for “XIX” below:

Slipknot guitarist Mick Thomson says that fans won’t have to wait long for a new album.

The metal band’s last album, 5.The Gray Chapter, was released last October, a full six years after their previous LP, All Hope Is Gone. In the intervening period bassist Paul Gray died and drummer Joey Jordison was fired.

But Thomson has now revealed that the ‘Knot have started recording ideas and song snippets via their laptops whilst they are on tour, and could even enter the studio to start recording their new album as soon as current live commitments are completed.

Speaking to MusicRadar Thomson said: “It enables us to have songs in the can already before we go in a studio to work on a new album. We hope to do our next record sooner after touring.

“We don’t want to spend the same amount of time between albums as we’ve done with the last two.”

Slipknot are about to embark on a series of tour dates across the UK and Ireland with Korn, supported by King 810. Confirmed shows are as follows:

A disgruntled ex-roadie for Slipknot has revealed the identities of their new drummer and bassist via Instagram.

Drum tech Norm Costa was hired and fired by Slipknot in recent weeks, and has now posted a picture of a Slipknot tour itinerary on his Instagram account which reveals the band’s new drummer to be Jay Weinberg, and new bassist to be Allessandro ‘Vman’ Venturella.

Costa tagged the image “#blowitup #fuckslipknot.” The image immediately followed the posting of a shot of Weinberg’s drumkit seen from the backstage area and tagged “#jayweinberg #slipknot #newdrummer #fuckslipknot.”

Rumours had been circulating about Weinberg’s identity since September when his former colleague in Against Me!, Laura Jane Grace, tweeted: “Dear Slipknot, good luck with that. #shitbag.”

Rumours persisted about Venturella too following the release of Slipknot’s video for Devil In I. Fans picked up on the bassist’s distinctive hand tattoos.

Slipknot frontman Corey Taylor had said that the band might never reveal the real identities of their new drummer and bassist who had been hired following the death of bassist Paul Gray in 2010 and the sacking of drummer Joey Jordison last year.

Slipknot and Korn will be touring the UK on their Prepare For Hell world tour in January of next year with King 810 in support. Confirmed dates are:

King 810 have confirmed that they will support Slipknot on the UK leg of their current Prepare For Hell world tour. The Michigan based band have already been playing in support of the ‘Knot and Korn throughout North America.

The announcement comes as King 810 release an official video for their track “Desperate Lovers.”

Says King 810 frontman David Gunn of the live shows: “We’re glad to be bringing King back to the UK so soon. We’re just as glad that the Prepare For Hell tour isn’t coming to an end just yet and we get to watch Korn and Slipknot for another 21 shows.”

“Desperate Lovers” is lifted from the band’s debut album, Memoirs Of A Murderer, released earlier this year via Roadrunner Records. The video, directed by King 810 frontman Gunn himself, features scenes of drug use recorded in the band’s hometown of Flint, MI.

Gunn alluded to the release of the video earlier this week, posting a statement on the band’s Facebook page: “We worked on this thing solo and discreetly and it’s our proudest work to date. This thing covers places and things not everyone can go and see. It’s a true representation of the song and the city and a lot of people including our legal team are not going to approve of its release, but fuck ’em.”

You can watch the video for “Desperate Lovers” below:

King 810 will play the following dates in the UK supporting Slipknot and Korn: