If all you know about Halifax in West Yorkshire is what you’ve learned from Sarah Lancashire on the BBC, or some high-profile TV ads for the banking sector featuring some bloke called Howard, then be prepared to have your eyes – and ears – educated.

Vermillion Tides are an up-and-coming rock band based in the town, playing a vintage-tinged, energised strain of psychedelic rock n’ roll. Having worked with a host of solo artists and bands with some serious pedigree, Vermillion Tides’ guitarist and chief songwriter Blair Murray decided to branch out on his own in an entirely new direction.

Blair himself picks up the story as the band catch up with Skin Back Alley ahead of their debut live show this coming weekend. Also present, vocalist Natalie Cooper-Bates, bassist Andrew Tarling and drummer James Newsome.

Skin Back Alley: Give us an introduction to Vermillion Tides. Who are you all and how did the group come together?

Blair Murray [Guitar/Songwriter]: Well Vermillion Tides has come about from when I split from Twisted Wheel and decided I wanted to form my own band, but something that was completely different.

Natalie Cooper-Bates [Vocals]: And that’s where I come in. Blair wanted a female singer, we had been dating for a while and he had seen me perform with an old band of mine, so it kind of made sense really.

James Newsome [Drums]: I had been mates with Blair for a long time, I even used to teach him drums. He wanted to focus on writing and playing guitar, so he asked me to join and work on some songs before we decided to recruit our other troops.

Andrew Tarling [Bass Guitar]: Me and Blair had worked together before doing some work for Tom Hingley [solo, Inspiral Carpets]. We had always kept in touch. He had sent me some demos of the new music he was doing and when he mentioned he needed a bassist I was well up for it.

Forming in 2015, the band itself may be relatively new, but you’ve all had experience playing with other artists and bands, I understand?

Natalie: Yeah that’s right, the lads have worked with some top artists. I myself had only previously played in a low key Leeds band a few years back and before that hadn’t ever even stepped in front of a mic. Actually, tell a lie, I sang with a mic at my school leavers assembly when I was 11 if that counts? I knew I could hold a note or two but just kept it to myself and that was that really.

Blair: I have been playing in bands since I was young and then from that I played drums for Tom Hingley on his solo album. It was Andrew actually that put my name forward for that, so cheers Andy. After that I was gigging round Manchester, and from that I was seen by Twisted Wheel’s management who asked me to join. This gave me some good opportunities. One of my favourite artists I worked with was Laura Cantrell, a country singer which was so far from what I was doing.

Your new single is “Atom Bomb” backed up with “Fortune Cookie” on the B side. Can you tell us about the stories behind the tracks and what they mean to you?

Blair: “Atom Bomb” is a hard one to put in to so many words as each line stands for different things, like everyone has a breaking point, frustration towards those who have power such as the “government.” But when each line of the lyrics is broken down it still comes together as one strong message. I would say it is mostly about people who have addictive personalities and the way those in power say what’s good and bad for you. The chorus is saying that we can all be like a bomb and in time we can blow up. Whilst writing the second verse Robin Williams had recently died, so the story of Adrian Cronauer who Williams plays in “Good Morning Vietnam” was added as condolence to him. There is so much more to this song, but lets just leave it there for now.

“Fortune Cookie” was written in a psychedelic way for the listener to struggle to work out what the story is about, as the meanings behind the song are quite personal. BUT I guess we can give some of it away now. The story can be dedicated to any one who has been disappointed, used and betrayed by the lies people live. The chorus line ‘here comes the rain’ I guess can be seen as a simile to here come the tears, which I’m sure most of us have been told whilst growing up.

The songs have a distinct psychedelic rock vibe to them, and that’s a theme that continues in your aesthetic such as in your logo and cover art. Presumably as a band you always knew you were aiming for that style and sound?

Natalie: The theme if you will is, yeah, that 70’s psychedelic style, but that has a lot to do with our general interest in that era for the clothing etc. Our sound is such a mixture, it’s so hard to say what genre you are and sometimes it’s just easier to put yourself in a category. Although to be honest if you come watch us and hear the rest of our stuff, our sound is all sorts, so you could say we were alternative but that word is so cliché and used way too often. We’re not too bothered what people want to say we sound like, it just matters if they like it or not and get a buzz for it like we do. 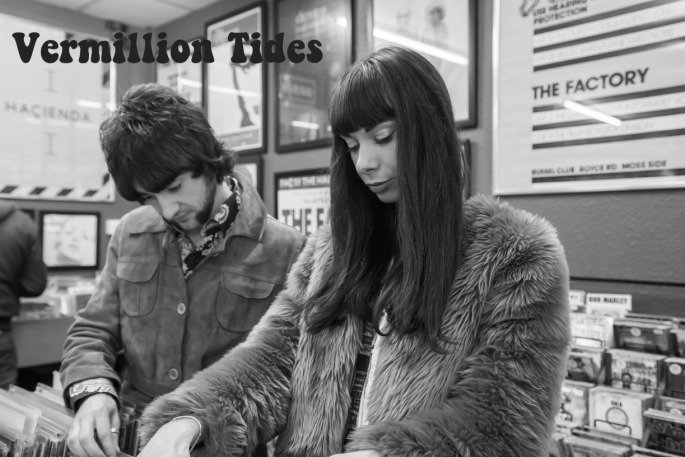 Are there specific bands or artists from that oeuvre that you look up to or draw inspiration from?

Blair: What actually set this idea off for me was when I watched the film “Dig!” [a 2004 documentary, directed by Ondi Timoner, about the careers of The Dandy Warhols and The Brian Jonestown Massacre], so yeah I suppose I have had inspiration from BJM. I like all sorts of bands from the psych scene like Spaceman3 and The Jesus And Mary Chain, which I suppose influences the sound of the music. But in terms of the lyrics it would be more artists like Tom Waits, Dylan and poets such as Oscar Wilde that I have taken an interest in.

Natalie: I wouldn’t say I actually really draw inspiration from anyone as such, I just like to do my own thing. With me in terms of inspiration it comes mainly from the way artists act or style themselves. I mean I can spend ages online just looking through pictures and footage of artists such as Grace Slick, and Cher (don’t judge, she had amazing presence when she first started!)

Where did you record the tracks and who did you work with to record and produce them?

James: We recorded “Atom Bomb” and “Fortune Cookie” with producer Yves Atlanta, who has worked with Peter Hook [Joy Division, New Order], DeStijl, Julie Gordon [Happy Mondays] and Mark Burgess [The Chameleons, I Am Kloot]. We then mastered the songs at Homespun Studios with Andy McKerlie who was the guitarist and piano/organ player on the Folks album “I See Cathedrals” and bass player for Marion.

And what has the response been like to the songs from audiences?

Andrew: It’s been great. Couldn’t really ask for a more positive feedback. It’s interesting to see people choosing which is their favourite song from what we have released so far. Everyone who has listened to “Atom Bomb”, whether it’s their style of music or not, has said they can definitely see it going down well live at gigs. It’s got so much energy. We recently got a quote from a Manchester magazine saying “Vermillion Tides are one to keep an eye out for if their following releases are as good as this first one.”

Can we expect a full album in time? Is that the next goal?

Blair: The next goal would be to release another single and then to bring out an E.P or a small album on vinyl. We are always writing new songs, and for our first album we want it to be the best it can be. I had written the songs before anyone had joined and now that Natalie has now been writing lyrics it feels right to wait until we have a collaboration of songs which has both our input.

Have you got any live shows coming up? Where can we see Vermillion Tides in the future?

James: Yes, we have our debut show coming up at Hebden Bridge, Trades Club on the 27th of February supporting Deadcuts. Their lead singer is Mark Keds from a band called Senseless Things [and he was also very briefly in The Wildhearts – Ed]. It will be such a good night.

Natalie: We love this venue, it’s so intimate and has had some great acts play there over the years. After this we will be playing The Lanes in Bristol on March 19th, which is another cracking venue; a bowling alley, a vintage shop and a gig venue. What more could you want? Another gig we can’t wait to do is in Manchester at The Castle Hotel on March 27th, where we have two great supports and a DJ set. Oh, and it’s on Easter Sunday, so no work the next day which is always a bonus.

Well the future for Vermillion Tides is obviously going to be massive! No, seriously, we have some great support already and can only hope for bigger things. The next step really is getting on some great festivals and keep building our fan base.

Finally, big up Halifax for us. “Happy Valley” has got us thinking it’s full of sociopaths and policemen and women with a dramatically troubled past.

Natalie: Ha, “Happy Valley” is actually a favourite of mine. Bloody loved the first series. Cant beat Sarah Lancashire, she’s great. But anyway, YES to putting Halifax on the map and making people see it’s not a ‘troubled town,’ We’re really proud of being from Yorkshire.