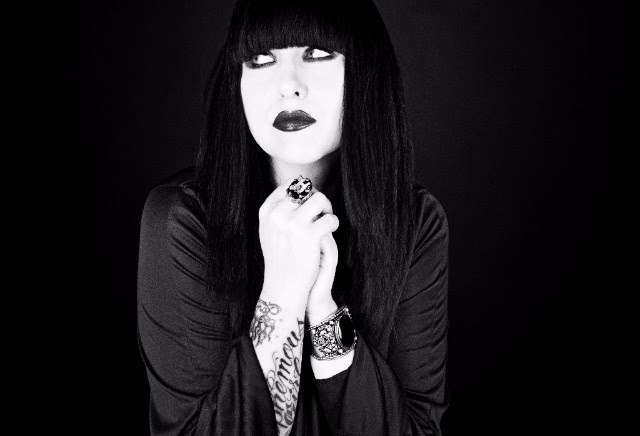 Tairrie B has dropped a killer new track to coincide with today’s new moon in the form of “Sky Above, City Below (Mediatrix Remix).”

The new cut comes hot on the heels of the heavy magick of Tairrie’s self-directed official video for her song “BTCHCRFVT”, lifted from her new solo hip hop album Vintage Curses, released worldwide back in August.

“Once again I’m thrilled to debut my latest remix which was conjured by London based producer extraordinaire Nina Mediatrix whose talents I discovered a few months back via Twitter when we first decided to join forces,” says Tairrie.

“After her badass spin on ‘Wicked Witch Of The West Coast’ got such a great response, I decided to ask her back to summon her creative magick on a new track,” she adds. “With ‘Sky Above, City Below’ she reworked my original hip hop hymn into her magnetic golden era style, drenching the vocals in funk guitars, brass and 90’s synths and samples. I love it! She really understands how to make the music resonate from her own unique perspective of incorporating classic elements. While I’m old school, she’s new to the rap game but she has a refreshing musical prowess which really comes across in her production and it’s inspiring to me as an artist. As I said before, it’s great to be working with her at such an early stage in her career. A true sister witch!”

Says Nina Mediatrix of working with Tairrie on the new track: “I was very flattered to be asked by Tairrie B to produce a follow up to my remix of ‘Wicked Witch Of The West Cost.’ Tairrie B is such an important figure in both rock and hip hop. When I heard ‘Vintage Curses’ the attitude, the samples and the overall mood really resonated with me and I thought it was intelligent, inspired and fresh.”

She adds: “That said, the rap in ‘Sky Above, City Below’ instantly appealed to me and I interpreted this song as a tale of Tairrie’s thoughts on her love/hate relationship with LA, seeing the city as a metaphor for wider pop culture. With skillful lyrics and delivery, Tairrie pays respect to the architects of West Coast hip hop as well as homage to the glamour and legend of Los Angeles and the Golden State, name checking muse Greta Garbo in one breath and conversely criticising the more shallow elements of Hollywood alongside the wider theme of a mainstream culture devoid of real meaning. To rephrase a line from the awesome original: Made by women, ‘for Women In The Coven of Hip Hop.'”

You can download “Sky Above, City Below (Mediatrix Remix)” for FREE here, and grab your copy of Vintage Curses for FREE here.

One thought on “Tairrie B drops new track ‘Sky Above, City Below (Mediatrix Remix)’”